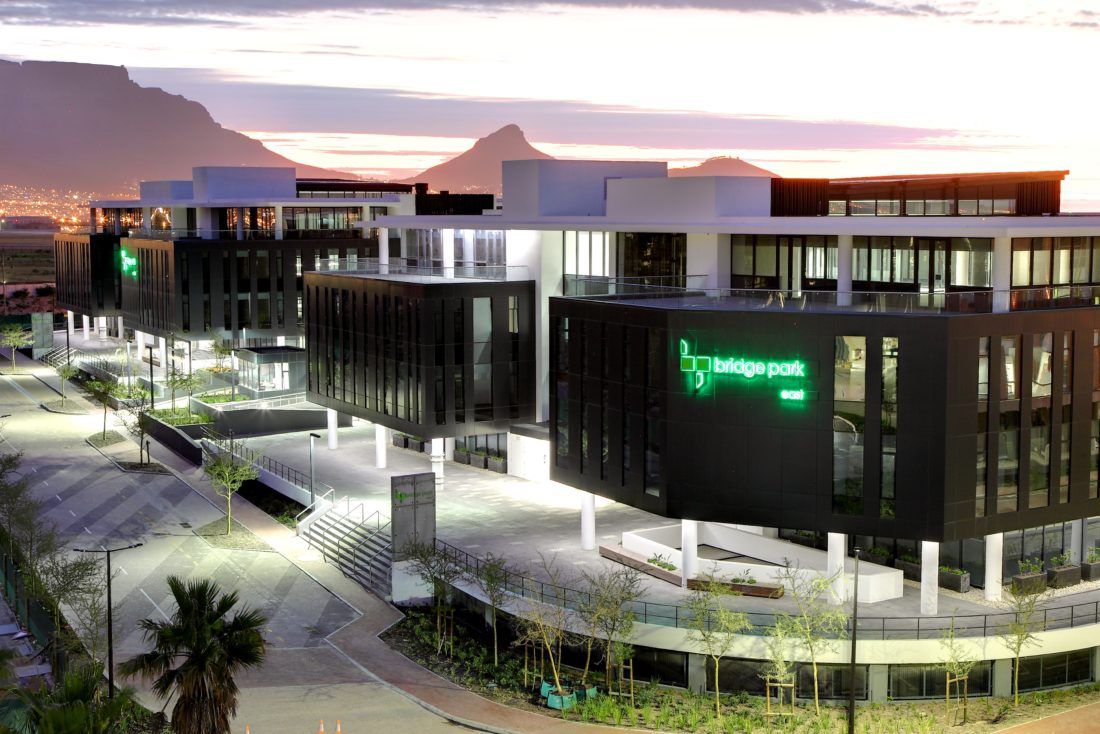 Absa Bank is set to consolidate its 14 offices in the Western Cape to one centrally located regional office at Century City.

One of the largest financial services groups in Africa, Absa has signed a 10-year lease for 14 000 square metre of offices in the newly completed Bridge Park office development in what is believed to be the largest letting deal seen in Cape Town for at least five years.

The buildings were developed in a joint venture between Rabie Property Group and Growthpoint Properties at a cost of R450million, and designed by dhk architects.

Fit-out of the buildings is due to start shortly with Absa personnel to be relocated to Bridge Park on a phased basis from mid-March next year.

Doug Walker, Managing Executive of Absa Bank in the Western Cape, says the decision to relocate to Century City had been made because of the need to consolidate its various offices into one central location and Century City provided the optimal solution.

“Absa’s new Century City offices are located in two 5 Star Green Star rated, energy-efficient buildings. We hope that this will provide both a creative and inspirational space for our staff to enjoy in one central location.”

Bridge Park is adjacent to the R1billion Century City Square project which includes the new Century City Conference Centre for 1900 delegates over 20 venues, a  new 125 room hotel, 15 000 square metres of offices, 51 apartments, numerous restaurants and coffee shops flowing on to a public square as well as basement and structured parking for 1300 vehicles. This entire development is due for completion in February next year ahead of Absa’s relocation.

Rudolf Pienaar, Growthpoint’s Office Division Director, comments: “We are excited to welcome Absa to Bridge Park where they will benefit from a high-quality, energy-efficient building that will save them space, time and money and support their business goals. Growthpoint is also thrilled to partner with Rabie Property Group on yet another of Century City’s most distinctive and innovative buildings. Bridge Park strengthens Growthpoint’s office portfolio with a top quality asset.”

Pienaar says that Century City is one of the best performing office nodes in South Africa and Growthpoint’s increased exposure to this fast-growing node furthers its investment strategy.

The entire conference precinct is being developed as part of “an all-green precinct” at Century City which is already home to among others, The Business Centre, Phillip Morris and Chevron – all of which have been accredited by the Green Building Council of South Africa.

Colin Anderson, a director of Rabie Property Group, said there had been strong interest in Bridge Park from a number of large corporates.

“We are now accelerating plans for a further two buildings – one of 8000 square metres and the other 7000 square metres –  in the precinct to accommodate those that missed out on Bridge Park,” he said.

Anderson said Bridge Park and The Square will both benefit from new infrastructure projects totalling more than R130million currently nearing completion. These include the construction of R45million of  roads and canals in the conference precinct,  an R18million upgrade of Sable Road, a further R2million upgrade of Bosmansdam Drive and the recently completed R35million  MyCiTi trunk station – all measures aimed at significantly easing peak traffic congestion.