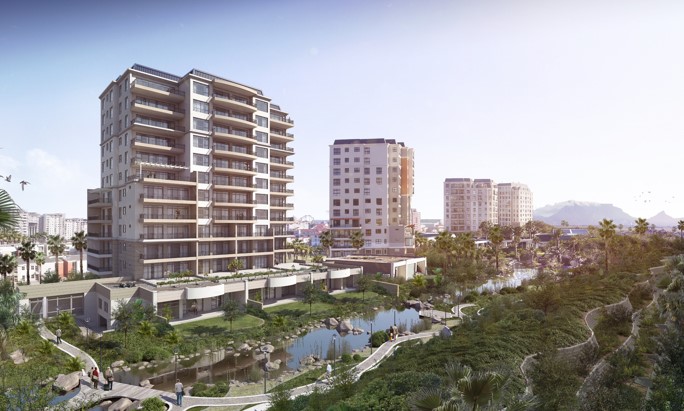 Construction of the fifth Oasis luxury apartment, Palm Brook, has now commenced, following the sale of 23 apartments for more than R120million.

Being developed in a joint venture between the Rabie Property Group and a Harries Projects consortium at a cost of R244 million, the 11 storey Palm Brook will comprise 52 one, two and three bedroom luxury apartments.

Palm Brook follows the handover of the fourth block, Palme d’Or where all 50 apartments have been transferred and handed over and where most owners have already moved in. Feedback from our agents and purchasers in the earlier blocks has been taken into account in the design brief of Palm Brook.

Apartments in Palm Brook, excluding balconies or terraces, range in size from 78 square metres to 161 square metres, and are priced from just under R3million to just over R6million, VAT inclusive. No transfer duty is payable.

All apartments will have basement parking and luxury finishes, including ducted air conditioning, while some will have a storeroom included in the price with additional storerooms available as optional extras.

As with its most recent predecessors, Palme d’Or and Palm Royale, Palm Brook will be linked to the extensive Oasis Club facilities by an undercover passage. A new satellite recreational building is also planned to add to the communal facilities for Oasis residents and their guests.

There are four penthouses and three garden apartments, the latter of which have exclusive use areas fronting on to a brook and the magnificently landscaped communal gardens. All but three of the apartments have terraces or balconies ranging in size from 12 square metres to 125 square metres.

Palm Brook will be served by two lifts and have a 24 hour dedicated concierge at the entrance lobby.

As WBHO is already on site, completion and transfer is anticipated for late 2017.

Project manager Raynard Haupt said strong interest was being shown in Palm Brook with many would be purchasers who have been considering Oasis for some time now realizing that there are only a finite number of opportunities left and they need to commit now to avoid disappointment and price increases as a result of rising construction costs.

After Palm Brook there will be only one further block coming on stream.

The first phase of the development included the magnificent Oasis Club House which boasts among other things a 25m indoor heated pool where regular water aerobics classes are conducted by a qualified teacher, a massage room, sauna, steam room, gym library, lounge areas, a restaurant, bar, bridge room, billiard room and an additional multi-purpose recreational/entertainment venue with a coffee bar and a covered patio overlooking a picturesque pond and beautifully landscaped gardens. The gardens were extended along with the second two blocks – Palm Royale and Palme d’Or – and will be further extended with the last two blocks.

Also completed in phase one is the 110 bed Oasis Care Centre which offers hotel-style assisted living apartments, frail care and a specialised Alzheimer’s/Dementia unit as well as physical rehabilitation. The Care Centre has operated for the past eight years and has set the benchmark when it comes to assisted living and frail care in retirement developments.