Formed in 2005, the Rabie Foundation is responsible for administering the group’s corporate social responsibility programme. Since inception, the Foundation has concentrated its efforts on helping the poorest of the poor, assisting many needy organisations and individuals from disadvantaged communities.

The broad range of beneficiaries, chosen, according to select criteria, have included night shelters to soup kitchens and organisations dealing with AIDS orphans. 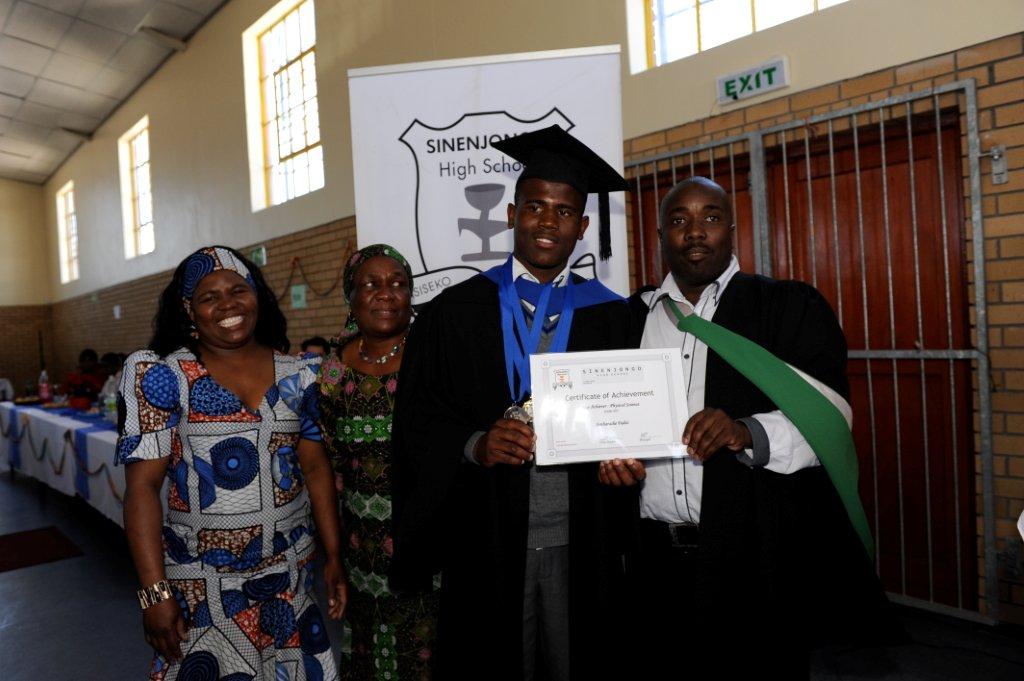 For the past decade Rabie’s CSI focus has shifted predominantly to education. In 2007 we adopted the Sinenjongo High School in Joe Slovo Park, Milnerton down the road from Century City as the major beneficiary of our Corporate Social Investment programme.

At the time, the school, which serves an impoverished community, was housed in containers and had little or no facilities. It also had a huge dropout rate with only one in five learners making it through to matric and even then only 27% achieving a pass and only very seldom a pass rate sufficient to go onto tertiary education.

Initially Rabie concentrated on addressing the school’s wish-list for facilities, first building a Science laboratory (the school had no lab) and then a second Computer laboratory which they provided in association with other Corporates – Old Mutual and Chevron, respectively.

At the end of the first year when an audit was done on the Science laboratory it was discovered that very little if any of the science equipment had been utilised and that the incumbent science teacher had no idea how to use most of the equipment.

It was then that Rabie, working closely with the School and Western Cape Education department, decided that in order to make a sustainable difference capital projects alone would not be sufficient. They had to find ways of lifting the standard of education in the school and upskilling the existing teachers.

As funds were limited, they initially introduced the St Mary’s Interactive Learning Experience (SMILE) which aims to increase the English proficiency of both educators and learners which was deemed essential to put an end to the double jeopardy situation of being taught in one language and examined in another.

In addition, an experienced, well qualified Science and Mathematics teacher with experience in mentoring other teachers was employed to both teach Grades 11 & 12 and help upskill the existing teachers. She worked tirelessly with some success but after the first year it was realised that this was too little too late and that the learners simply lacked the basics. What was required was earlier intervention in Grades 8 and 9 to help build the necessary foundation.

So in year four, an additional Science teacher was employed for these grades and another on a part time basis to mentor the Gr 8 and 9 Maths educators and more have been brought on board since.

There are now five full-time and two part-time teachers funded by Rabie and the results are impressive. Not only is the school consistently achieving a matric pass rate of between 87 and 97% but the drop out rate has been slashed with our matric classes now averaging 150 learners.

Over and above this, we have instituted other programmes to assist the learners – Cami computer training for the Grade 8s and 9s to improve their numeracy and literacy, Paper Video programmes for the older grades to give them additional practice with exam papers and we also bus the matrics to Kraaifontein every Saturday for extra classes with the Asset organization.

In addition, extra mural activities  have been added to the school programme including sports, clubs, choir and athletics.

Then in January 2017, the school moved into brand new beautiful permanent premises on the corner of Omuramba Road and Freedom Way which has completely transformed their day to day lives.

Most of our matriculants now head to tertiary education after school and our first graduates are now out in the work place forging careers for themselves in a variety of fields.

Many return to the school, to give back to others.

When we first got involved, absenteeism among learners and teachers was extremely high, motivation was low and an air of despondency and despair pervaded. But all that has changed. The school has become a beacon of hope in an otherwise desolate landscape, a cornerstone of the community and a source of pride. The turnaround has seen increasing involvement and support of the learners’ families and the learners truly now understand that with hard work they can attain success and the key out of poverty.

In the mid-1980s, prior to democracy, the Rabie Group moved into many of the townships around the country (Meadowlands, Soweto, Umlazi, Khayelitsha, Khatlahong, Daveyton, Lamontville and Duduza to mention but a few) in a bid to provide affordable housing for marginalised and disadvantaged communities. We developed about 500 homes a month over a six to seven year period before the bond boycotts made it impossible to continue operating in this market.

Since then, we have been directly involved in the planning and development of Joe Slovo Park, in Marconi Beam, and Westlake Village, in Westlake Estate – both social housing projects in which squatter communities from these two sites were re-housed.

The Rabie Group pioneered BEE partnerships well before democracy. In the late 1980s the Group took private equity in a black-owned investment business, Combi Investments, which went on establish Master Currency, now a leader in the field of foreign exchange. In the early 1990s the group also undertook the development of petrol stations in the Eastern Cape with Combi Investments and went on to jointly develop Nyanga Junction, a shopping centre that straddles the communities of Gugulethu and Mannenburg. The shopping centre opened in 1994.In more recent years we have forged BEE joint ventures or partnerships with, among others:

The Rabie Group has pioneered public private partnerships with various parastatals, provincial and local authorities from the early 1990s. These unlock enormous value from land assets owned by these bodies and, in the case of Marconi Beam and Westlake Estate, using the principle of cross-subsidization to resettle squatter communities in formal housing on the same site.

In two other major developments with municipal authorities, and in conjunction with Cavcor, The Rabie Group acted as Development Facilitators to help local authorities maximize the value of large tracts of land.

In 2000, working together as the Rabcav consortium, we helped the City of Cape Town to plan, rezone and develop a 120-hectare tract of land adjacent to Bloubergstrand, known as Big Bay. The resultant mixed-use development proposal opened up a total of 2 400 residential units, 38 000 square metres of commercial space, a petrol filling station, and public amenities.

In Hermanus, working together with BEE partner Buyambo, we facilitated the development of Fernkloof Estate on the Hermanus Golf Course, on behalf of the Overstrand Municipality. Proceeds from this development are being used to fund various critical infrastructure projects in the greater Hermanus area for the benefit of Overstrand ratepayers. The development included the extension of the Hermanus Golf Course from 18 to 27 holes, the creation of 15 golf lodges and 330 residential erven.