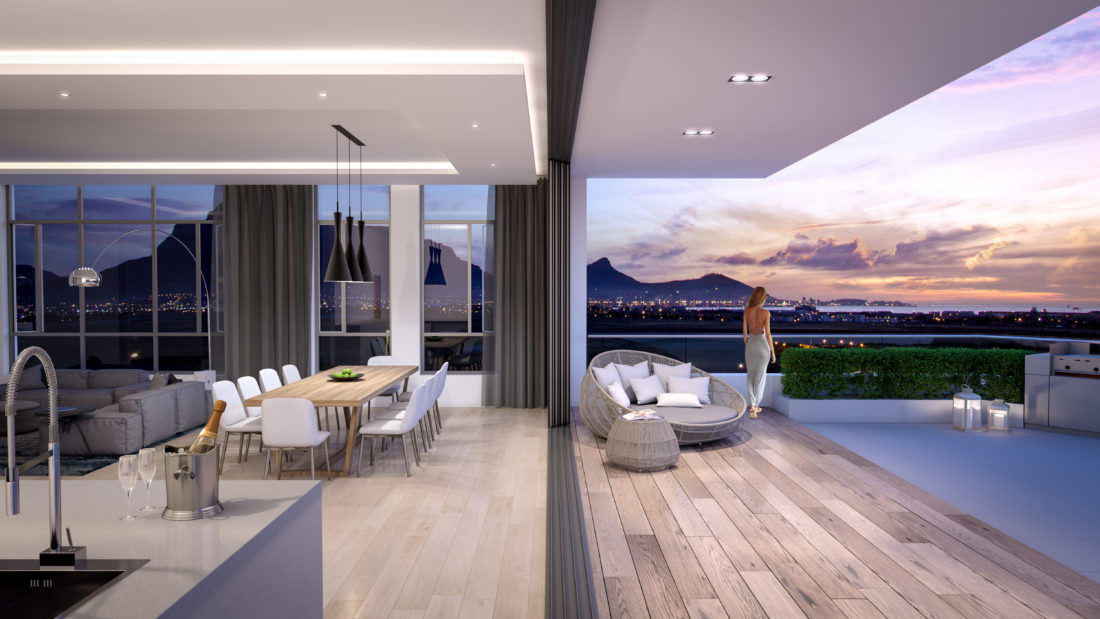 Axis, an iconic high-rise residential development offering spectacular views of Table Mountain and Table Bay into perpetuity, is to be built on a prominent site at Century City in Cape Town at a cost of R400million.

It will comprise a total of 83 one, two and three bedroom apartments including six deluxe penthouses which will exude unashamed luxury and boast entertainment sized terraces of up to 80 square metres.

John Chapman, a director of Rabie, said the building has been orientated to maximise mountain and sea views providing a front seat to one of the Seven Wonders of the World.

The large penthouses range from 166 square metres to 222 square metres with configurations varying to include a combination of study, TV lounge, fourth bedroom and scullery.

All the above mentioned areas exclude balconies and terraces, the smallest of which is 8 square metres.

However, according to Chapman, the majority of units are priced between R3,5million and R4,5million.

All apartments will boast high-end finishes, Smeg appliances and will have Fibre To The Home providing them with access to high speed connectivity, the last of which has become synonymous with Century City.

Basement parking will be provided on a ratio of one bay for each one bedroom apartment and two bays for all two, three and four bedroom units. Basement stores are also available.

The building will have a state-of-the-art external cladding facade, double glazing on all windows on the outer perimeter and all 29 sea facing apartments will have the lounge air conditioned.

The ground floor will also comprise a niche restaurant /cocktail bar flowing out onto a terrace and a boutique retail and office component.

Chapman says each apartment has been meticulously designed to optimise views, light and provide a generosity of space that extends to the provision of ample external terraces.  High quality finishes have been specified both internally and externally to ensure the long-lasting beauty of the contemporary design.

A 24-hour concierge in the entrance court will complete the exclusive nature of the development.

Axis is to built on a high visibility corner site adjacent to the vibrant R1billion Century City Square development, the new commercial and hospitality hub of Century City with its popular restaurants, bars and bustling public square as well as the Century City Conference Centre & Hotel and Virgin Active gym.

Peter Storey of dhk Architects says the ground floor activity of Axis creates a public destination that completes the series of inter-connected public spaces through the Bridgeways Precinct which is also home to Absa’s new regional offices, Chevron, Thomson Reuters, Derivco, Philip Morris, among others.

“The concept for Axis compliments the greater urban strategy by creating a series of public, semi-public and private spaces and urban courts. A public urban plaza is introduced as a forecourt and arrival space. This dynamic plaza is fed by routes along the pedestrian network in the precinct that feeds into a sheltered landscaped courtyard at the heart of the scheme.

“A series of transparent glazed commercial and public spaces surround the courtyard and provide 360 degree views of the surroundings.  The courtyard spills out onto secure landscaped gardens; providing a place to enjoy sundowners and views of the majestic Table Mountain.’’

He says the compact form of the building wraps around itself and gradually rises up towards the views of Table Mountain, Table Bay and Robben Island.

“The unique ‘donut’ shaped form is adorned with visual ‘gashes’ that allow the sheltered walkway spaces to catch glimpses of the city around it; connecting the inside circulation to the outside world. The rising forms cuts away creating dynamic terraces and activity at different heights culminating in the generous penthouse units. To top it all off a panoramic lift is positioned at the pinnacle of the mass, transporting every inhabitant on a scenic journey to their destination.”

Storey adds that the building connects to the environment in a myriad of strategic ways and sets a precedent for urban conscious residential developments in the city.

Brian Usher, Sales Director of Property World, the exclusive sales agents for Rabie’s new developments at Century City, said Axis would be in a class of its own.

“There is no doubt the location of the building, the quality of the development and its superb mountain and sea views will ensure buyers in the Axis will also enjoy the same amazing capital appreciation that buyers in earlier developments at Century City have.”

Construction is to commence in the New Year and completion is anticipated around October 2018.