Larry Joe knocks the socks off us 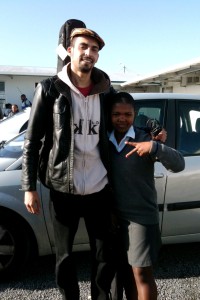 Larry Joe & one of the learners at Sinenjongo High School

Singing sensation Larry Joe, a reformed ex-convict, blew the socks off Rabie staff and guests as well as the 750 learners at Sinenjongo High School at two separate performances yesterday.

Among the songs he sang was Let You Know, which is the first single released from his debut album, Crazy Life which was recorded in a single cell in the Douglas Correctional Centre and was released on 13 December 2010, the same day that Larry was released from prison where he had been serving a sentence for housebreaking and theft.  After being on the run for about five years, Larry decided to turn his life around and to follow his dream to become a world-class musician. He handed himself into the authorities in February 2008 and was sentenced to five years imprisonment in the Northern Cape. On World Aids Day in 2008, Larry Joe was performing at a government function in Douglas and met Aron Turest-Swartz, a founder member of Freshlyground, the multi-award winning South African Band who were the main act. Impressed by Larry’s outstanding voice and the songs he had written behind bars, Aron approached Larry and the prison authorities and offered to work with him to develop his skills and produce a solo album. 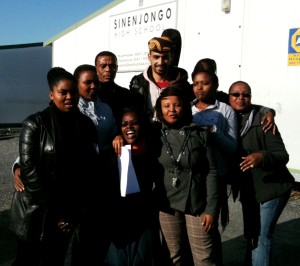 While in prison, Larry composed over 40 original songs in English, Afrikaans, Xhosa, Spanish and Portuguese, collaborating with fellow inmates, as well as one of the wardens, who helped him translate his songs. With the invaluable support and co-operation of the officials at the facility, Larry and Aron were able to record an album in highly unusual and challenging circumstances.

Larry Joe is a living testament of someone who has undergone a truly remarkable inner transformation with music being at the very core of this process. He now plans to take his message to every school and prison in the country. And the way he touched the 750 learners at Sinenjongo High School in Marconi Beam yesterday was astounding. As one teacher said: “I think Larry Joe taught them more in one hour than they usually glean in a 100 days of normal schooling!”

There is no doubt, Larry Joe has a huge future ahead of him both in terms of his singing career and as a motivational speaker come change agent.

If you have never heard the music of Larry Joe, you might want to do yourself a favour and go to www.larryjoelive.com and listen to his music on YouTube. His CD is also available for sale.