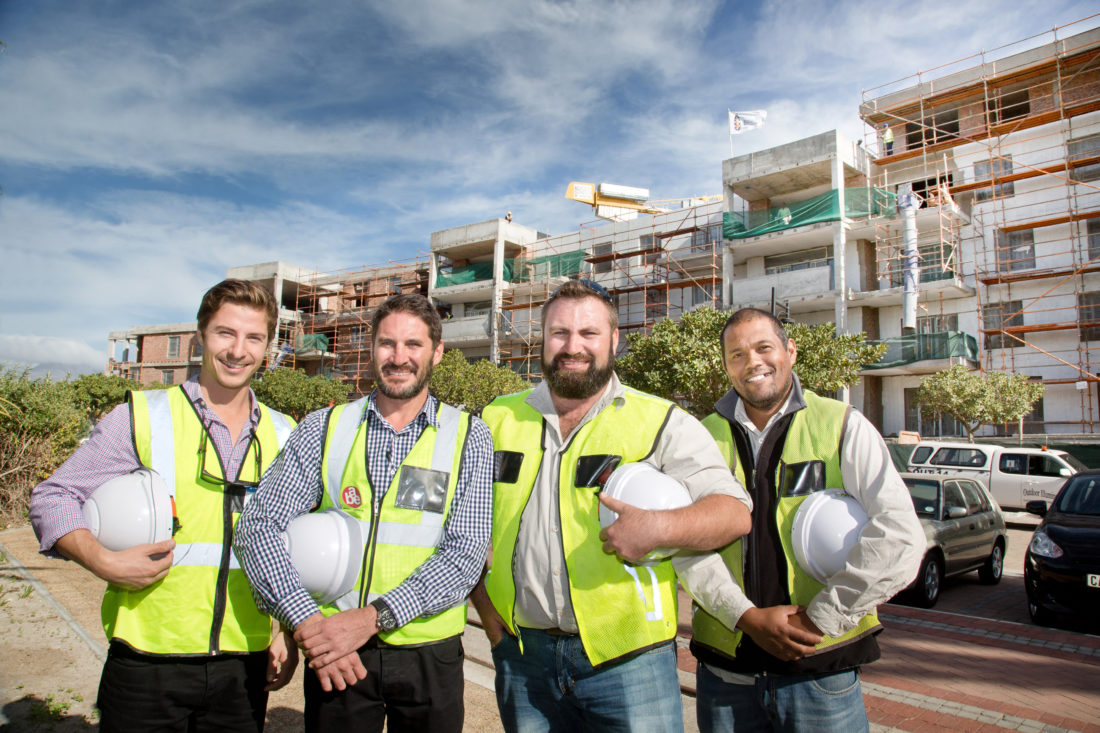 Construction of Manhattan Quarter, a complex of 63 apartments overlooking the Grand Canal in Century City, has topped out and is on schedule for completion in mid-October.

Being developed by the Rabie Property Group at a cost of R150million, Manhattan Quarter comprises generously sized apartments which were all sold out months ahead of construction which started in July last year.

The apartments were sold for between R1 425 000 and R4,8million and are housed in two adjoining blocks with a staggered skyline of three, four and five storey sections and serviced by two lifts off a central lobby with a concierge desk.

They range from one bedroom units to four bedroom duplexes and vary in size from 70 square metres to 228 square metres, including balconies.  All apartments will have secured, covered parking for two cars and overlook either the Grand Canal or the largest public park in Century City.

Manhattan Quarter is conveniently located on a site adjoining Manhattan Towers –  a 15-storey block of 82 apartments set over a ground floor commercial component including a restaurant and conference facilities – and Manhattan Wharfside – a strip of single and double storey apartments fronting onto the Grand Canal. The existing Manhattan components were built in red facebrick and this architectural element is being carried through to Manhattan Quarter.

It is also in easy walking distance of Canal Walk Shopping Centre – which is a bridge over the canal away – as well as restaurants, a park, schools, a crèche and the MyCiTi bus station.

Designed by Munnik Visser Architects, Manhattan Quarter is being constructed by Big Ben Construction. Handovers and transfers are scheduled for November this year.

The rest of the Manhattan precinct, which will include a commercial component, a restaurant, a large park and a crèche for 160 children, is also under construction and due for completion in November.

According to Brian Usher, Sales Director of Property World, Century City residential properties have shown significant capital growth in recent years due to demand for properties in the precinct far outstripping supply.

“Century City has definitely become a sought after residential node due to a number of factors including its high level of safety and security, its well maintained environment and the fact that there is every conceivable facilities right on the doorstep.

“As soon as resale properties come on the market they are snapped up and we are always looking for stock.

“Sales in new developments at Century City have also strongly outperformed the rest of the market,” he said.