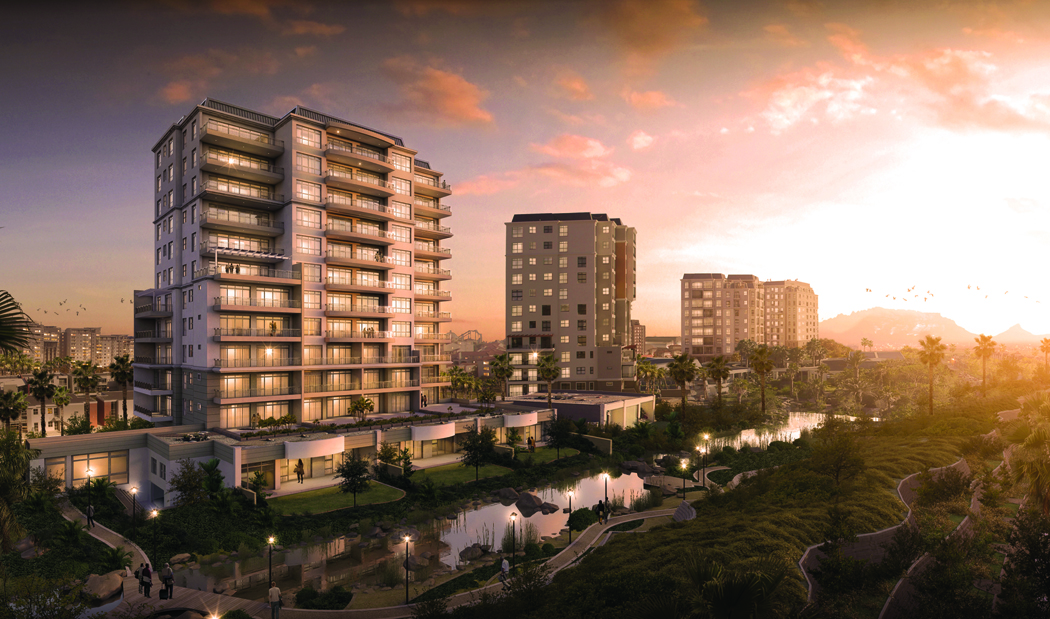 Sales at the recent launch of Palme d’Or, the fourth apartment block in the Oasis Luxury Retirement Resort at Century City,  have far exceeded expectations with 18 of the 46 apartments purchased in the first 12 days and further apartments under offer.

“This is unprecedented for a retirement product,” says Colin Green a director of the Oasis Joint Venture which comprises Rabie Property Group and a Harries Projects consortium.

“In fact when Oasis launched its first apartment block back in 2004 only seven units were sold in the first year.

“Since then the tempo of sales has picked up considerably – we have sold over 230 apartments in the first three phases with a total of 17 units in our phase three building, Palm Royale being sold since January this year but we have never achieved anything close to 18 sales within 12 days!”

The 18 Palme d’Or apartments, he said, had been sold for a total of more than R70million.

Green said that over and above this their sales team had notched up a number of resales over this period.

“So all in all it has been an incredible showing and we will be in a position to start construction of Palme d’Or in January 2015 for completion in mid-2016,” said Green.

Meaning Golden Palm and named after the highest prize awarded at the Cannes Film Festival, Palme d’Or will be “unashamedly upmarket”.

Priced from R2 650 000 to R8 500 000, VAT inclusive and with no transfer duty payable, all apartments will have basement parking and most of them will also have a store-room included in the price.

He said there were many factors driving sales at Palme d’Or not least of which was that buyers could see the high calibre of the development they were buying into and that all the amenities such as clubhouse and care centre were already there and not based on future forecasts or promises.

The first two phases of the Oasis development consisted of Palm Springs and Palm Grove apartment blocks with 174 units in total and a Club House, of which all residents automatically enjoy membership of. These facilities include a 25m indoor heated pool where regular water aerobics classes are given by a qualified teacher, a massage room, sauna, steam room, fully equipped gym, a library, lounge areas, a restaurant, bar, bridge room, billiard room and a new 200 seater multi-purpose recreational/entertainment venue with a patio overlooking ponds and beautiful landscaped gardens which were extended with the opening of Palm Royale and will be further extended with Palme d’Or.

Also completed in phase one is the Oasis Care Centre which offers hotel-style assisted living apartments, frail care and a specialised Alzheimer’s/Dementia unit as well as physical rehabilitation.

As with Palm Royale, Palme d’Or will be linked undercover to the Oasis Club.

Green said besides all the exceptional facilities provided at Oasis, its location in  Century City put it within easy walking distance of other world class amenities including Intaka Island wetlands reserve and Canal Walk Shopping Centre.

“In addition, Century City’s pristine environment, beautiful landscaping, its high level of safety and security, its modern infrastructure and MyCiti bus service and so forth provide further appeal to purchasers.”

A furnished showflat is available for viewing in Palm Royale – the third completed block  – where potential buyers can see the high quality of finishes that Oasis offers.

To be developed at a cost of R220million, the 11-storey Palme d’Or will be served by two lifts and a 24 hour dedicated concierge.