Formed in 2005, the Rabie Foundation is responsible for administering the group’s corporate social responsibility programme. Since inception, the Foundation has concentrated its efforts on helping the poorest of the poor, assisting many needy organisations and individuals from disadvantaged communities.

The broad range of beneficiaries, chosen, according to select criteria, have included night shelters to soup kitchens and organisations dealing with AIDS orphans.

Identified by Education Department as one of 20 “at risk schools” in the region, with little to no facilities, the Milnerton Rotary Club approached Rabie in 2007 to assist. Rabie adopted Sinenjongo High School as the major beneficiary of its CSI programme since then.

At the time, the school, which serves an impoverished community, was housed in containers and had little or no facilities. It also had a huge dropout rate with only one in five learners making it through to matric and even then only 27% achieving a pass and only very seldom a pass rate sufficient to go onto tertiary education.

Rabie applied pressure on the Western Cape Education Department to provide the school with proper facilities, but they had no land in the area. We helped secure the Old Mutual site where the school is now located, and for which the Department had to pay Old Mutual a market related price.

In January 2017, the school moved into brand new beautiful permanent premises on the corner of Omuramba Road and Freedom Way which has completely transformed their day to day lives. It comprises 33 classrooms, 8 specialist classrooms, 4 science laboratories, ablution and storage facilities, an administration block, a computer room, school hall and media centre and a dedicated sports field.

Most of our matriculants now head to tertiary education after school and our first graduates are now out in the work place forging careers for themselves in a variety of fields. 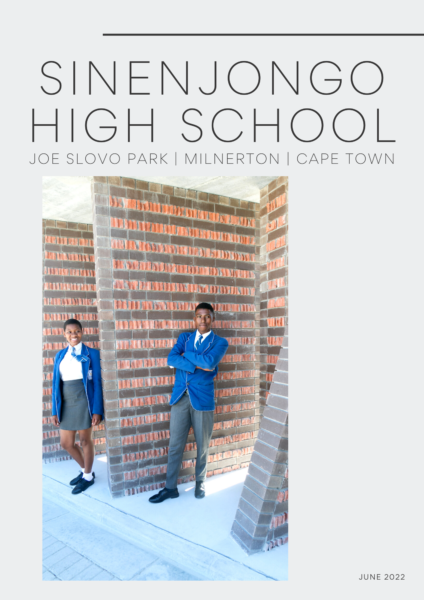 Read all about Sinenjongo High School – its history, Rabie’s journey with the school, and how you can get involved via the link below.

More articles about Sinenjongo High School you might find interesting:

In the mid-1980s, prior to democracy, the Rabie Group moved into many of the townships around the country (Meadowlands, Soweto, Umlazi, Khayelitsha, Khatlahong, Daveyton, Lamontville and Duduza to mention but a few) in a bid to provide affordable housing for marginalised and disadvantaged communities. We developed about 500 homes a month over a six to seven year period before the bond boycotts made it impossible to continue operating in this market.

Since then, we have been directly involved in the planning and development of Joe Slovo Park, in Marconi Beam, and Westlake Village, in Westlake Estate – both social housing projects in which squatter communities from these two sites were re-housed.

The Rabie Group pioneered BEE partnerships well before democracy. In the late 1980s the Group took private equity in a black-owned investment business, Combi Investments, which went on establish Master Currency, now a leader in the field of foreign exchange. In the early 1990s the group also undertook the development of petrol stations in the Eastern Cape with Combi Investments and went on to jointly develop Nyanga Junction, a shopping centre that straddles the communities of Gugulethu and Mannenburg. The shopping centre opened in 1994.In more recent years we have forged BEE joint ventures or partnerships with, among others:

The Rabie Group has pioneered public private partnerships with various parastatals, provincial and local authorities from the early 1990s. These unlock enormous value from land assets owned by these bodies and, in the case of Marconi Beam and Westlake Estate, using the principle of cross-subsidization to resettle squatter communities in formal housing on the same site.

In two other major developments with municipal authorities, and in conjunction with Cavcor, The Rabie Group acted as Development Facilitators to help local authorities maximize the value of large tracts of land.

In 2000, working together as the Rabcav consortium, we helped the City of Cape Town to plan, rezone and develop a 120-hectare tract of land adjacent to Bloubergstrand, known as Big Bay. The resultant mixed-use development proposal opened up a total of 2 400 residential units, 38 000 square metres of commercial space, a petrol filling station, and public amenities.

In Hermanus, working together with BEE partner Buyambo, we facilitated the development of Fernkloof Estate on the Hermanus Golf Course, on behalf of the Overstrand Municipality. Proceeds from this development are being used to fund various critical infrastructure projects in the greater Hermanus area for the benefit of Overstrand ratepayers. The development included the extension of the Hermanus Golf Course from 18 to 27 holes, the creation of 15 golf lodges and 330 residential erven.