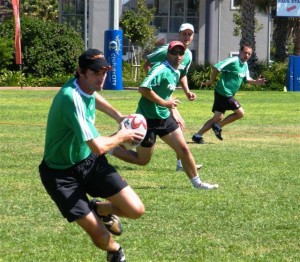 The Rabie Nomads in action

The Rabie Nomads came second in the Corporate Touch Rugby Tournament at the weekend.

The signature event of the action-packed, three-day Sports Festival was the 10km Century City Championship Road Race on Saturday, March 5 with more than 1200 runners of all ages participating. This annual event, for which there are fantastic prizes and where the first 1000 runners home all receive medals, is becoming an increasingly important fixture on the Western Province Athletic Calendar.

The race follows a safe, flat, circular route in and around Century City providing an ideal opportunity for runners to achieve their personal best times. First home was Lukhanyo Mabinza (Transnet) in a time of 29 minutes 44 seconds followed by Zolani Ntongana (Mr Price WP) and Gert Thys (temporary licence) in third position.

The first Masters runner over 50 years was Vladimir Kotov, Century City’s brand ambassador and a founder member of the Century City Athletics Club, who finished in 32 minutes 58 seconds.

Just under 100 cyclists took part in the Kermesse Circuit Cycling with the current South African road champion, Darren Lill, winning the Elite category while three of South Africa’s top paddlers – Patrick Birkett, Zaran Courtney and Gavin White, all members of the South African national sprint team – were among the 80 entrants participating in the Canoe Challenge.

Chris Blackshaw, CEO of the Century City Property Owners’ Association which organized the festival, said they were delighted with the turnout over the weekend.

“We were honored to have our 10km road race recognized as the official 10km WP Championship run for 2011. This, plus the flat scenic route, contributed to the record turnout. However, the festival is not just about competition and winning, it is also an immensely popular social event with families turning out en masse to support participants and join in the festivities.”

“We aim to continue growing the Sports Festival each year and additional sponsors are now being sought to ensure the 2012 Century City Festival is even bigger and better,” he said.

Those interested in sponsoring the event and getting naming rights should contact Bianca on 021 5526889 or email her at bianca@centurycity.co.za

For the full results of the various sports codes go to www.centurycity.co.za