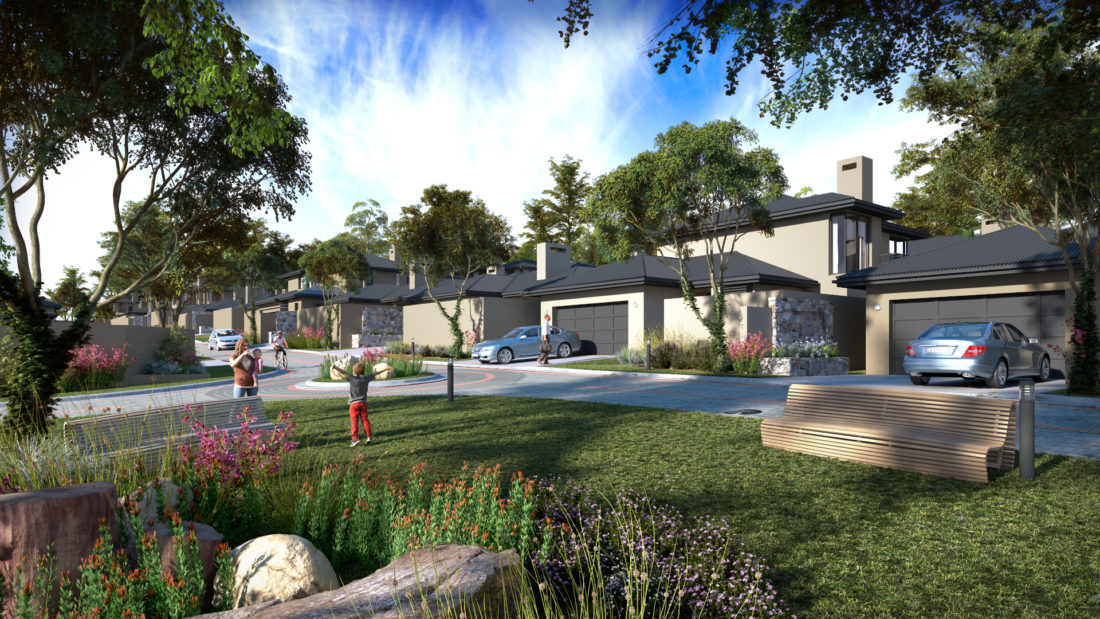 The long-awaited release to the market of the first phase of 126 townhouses in the exclusive Clara Anna Fontein lifestyle estate in Durbanville has arrived!

The 57 homes in the first phase will be launched on Saturday April 16 and will be on show at the Sales Centre at Clara Anna Fontein over the weekend from 10am until 5pm and again on the weekend of 23 and 24 April.

This phase of the development will comprise 57 homes, priced between R3,2million and R5,5million,  with buyers having a choice of seven different layouts – four single story and three double storey with one configuration allowing a choice of two or three bedrooms. All the others will have three bedrooms, two bathrooms and a double garage while some will also have a laundry/utility room or scullery.

Mariska Auret, project manager at Rabie Property Group, which is undertaking the development in a joint venture with landowners, the AFM Louw Family Trust, says the townhouses will be separate title and will be free-standing with private, landscaped gardens with automated irrigation systems.

The 128ha Clara Anna Fontein estate borders a private game reserve and is destined to become the most sought-after address in the northern suburbs. When completed it will also include 344 single residential homes, 176 retirement homes which are to be released early next year and a Reddam House High School, construction of which is scheduled to commence in the second half of 2016 with first intakes for January 2017.

The release of the townhouses follows the sale of 295 or 85% of the single residential stands with a total value in excess of R600millio. Here buyers will be able to build their own homes according to architectural guidelines.

Designed by award-winning Vernon Viljoen Architects, the design of the townhouses incorporates a number of exciting upmarket architectural features including stone cladding, timber and large expanses of glazing.

Viljoen says that as the development is situated in a rural area, the brief was to design low visual impact buildings which blend into the landscape, rather than protrude from it, with buildings complementing the low rolling hills and topographic features of the site.

“The client felt strongly that the buildings should possess a unique character which distinguishes Clara Anna Fontein from other estates in the area.

“The use of wide roof overhangs, flatter roof pitches, hipped roofs and heavy walls with strong horizontal design elements is suggested and natural materials such as wood and stone are combined harmoniously with steel and concrete.

“The design ethos is one of creating simple, sophisticated contemporary architecture without gratuitous embellishments added in order to conform to current trends. We aimed to establish a new benchmark in uncompromising luxury design.  Fashions change – timeless architecture does not age,” he said.

According to Auret, many of the properties will have views across the vineyards towards the mountains around Stellenbosch.

Construction of the townhouses is anticipated to start in June this year with handover and transfers from March to October 2017.

The estate will also include a range of recreational and sports facilities including two tennis courts, one squash court, a fully equipped gym and a 25m lap pool as well as entertainment and function venues in the existing buildings.

The original 18th Century Manor House on the estate is to be restored and extended to provide a lifestyle centre where residents will be able to enjoy a meal or meet friends for a drink.

Clara Anna Fontein is being developed as a high security estate with an extensive network of CCTV cameras on the perimeter and throughout, biometric access control, electric fencing and anti-dig barriers as well as 24 hour manned security.

The construction of roads and services is currently underway while the Gatehouse, which will provide a dramatic sense of arrival, is expected to be completed towards the end of this year.

For further details go to www.claraannafontein.co.za or contact Johan de Bruyn of agents, Louw Coetzee on 082881201.