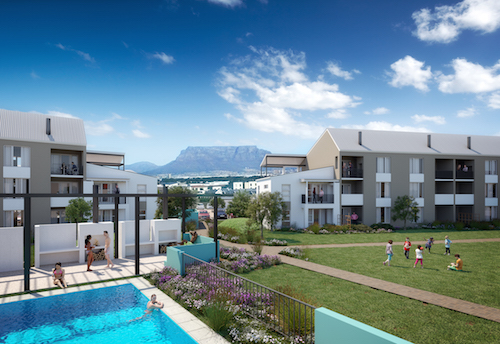 A total of 112 apartments and townhouses totaling R121million were sold or reserved in the launch week of Zarina in Burgundy Estate, Cape Town.

Being developed jointly by Rabie and Nedbank, the R210million Zarina development comprises 165 one and two bedroom apartments and 16 townhouses.

Only phase one was initially available for sale at the launch but strong demand from buyers saw the remaining two phases being brought to the market in the first few days.

Brian Usher of Property World, the dedicated sales agents for the development, said a total of 90 apartments – representing 55% of the scheme – had been sold at the launch with a further 17 having been reserved. In addition, four three bedroom townhouses had been sold for a total value of R8,9million and a fifth reserved.

He said buyers represented a mix of investors who have loyally followed Rabie from development to development as well as a large number of new buyers, many resident in the area.

“There has also been a mix of owner occupiers and investors with the former responding to the unbelievable value for money that is on offer and the latter to the very strong demand for rental accommodation in the suburb.”

One and two bedroom apartments, which will vary in size from 53 square metres including balconies to 88 square metres are priced from R740 000 to R1,235 000 with three bedroom townhouses selling from R2,020million, VAT inclusive. All units are north-facing or have views of Table Mountain and Table Bay.

Miguel Rodrigues, Development Manager for Rabie, says these prices equate to a very competitive cost of around R14 000 per square metre for a quality product which is being delivered from early to mid 2017.

“This has been made possible as Zarina is much larger than other developments in the area and as such it has introduced economies of scale  and also due to our relationship with the contractor.

“This has also allowed us to provide a range of communal facilities including a swimming pool, clubhouse, plenty of private open space including a play park and other play areas making it an ideal home for young families.”

Ample parking is being provided on a ratio of 1,75 bays  per apartment. Each apartment will have one allocated bay with the balance of bays being pooled for communal use and visitors, says Rodrigues.

The entire development will have perimeter fencing with a gatehouse and 24 hour manned security.

This is the second residential development to be undertaken by Rabie and Nedbank at Burgundy Estate but the first to be offered for sale to the public.

The first project, Vermont, consisting of 190 one, two and three bedroom apartments has been acquired in its entirety at cost of R200m by a private investor for rental stock while the next development is already in the planning stage.

Construction of Zarina is expected to start in March 2016 with the first phase scheduled for completion in early 2017.

For further details go to www.burgundyestate.capetown or telephone Brian on 0825717024.