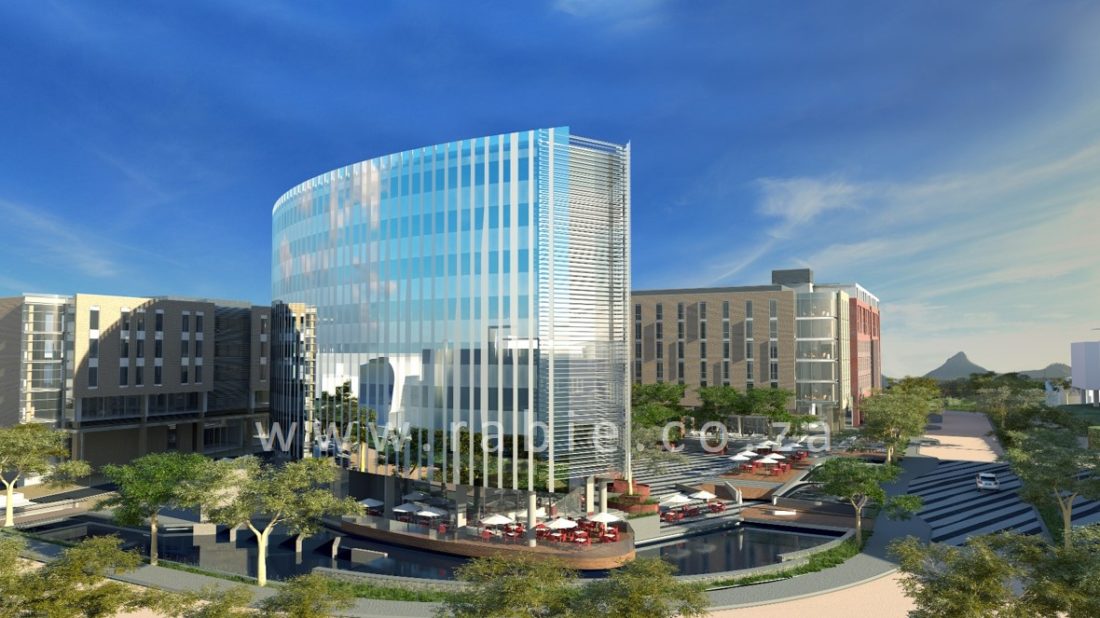 The Apex, an iconic “green” eight storey building comprising seven storeys of offices with ground floor restaurants, bistros and coffee shops spilling out onto a public square is being built at Century City at a cost of around R185million.

The building, which will boast dramatically curved facades and offer spectacular views, will form the focal point of the Century City Urban Square, a R1bn mixed use development which will include inter alia, a 900 seat conference centre, a 125 room hotel, 15000 square metres of offices, showrooms and 51 residential apartments.

The entire Urban Square development is set around a tree-lined Square with beautiful fountains and cascading water features and which will host a variety of outdoor events and entertainment.

Colin Anderson, a director of developer, the Rabie Property Group, says the five service-orientated retail opportunities and restaurants on the ground floor will vary from 60 square metres to 300 square metres.

“This is going to be the new commercial hub of Century City with a vibrant leisure and entertainment offering designed to attract not only those living and working in the Century City vicinity but people from far afield.

“And to this end negotiations with a number of top operators are well advanced.”

“We are primarily targeting larger office users – either as tenants or purchaser – but the layout has been designed to also allow for flexible configurations from 280 square metres.”

Gross rentals will be in the order of R175 per square metre, he said.

According to Anderson, ample parking for the Apex will be provided in a super-basement below the Urban Square with flexible rental solutions offered.

The Apex will be situated close to the MyCiti station and in easy walking distance of a variety of world class amenities including the Virgin Active Gym, the convenience retailing at the Colosseum and the Canal Walk Shopping Centre.

Construction of the Apex, which got underway in August 2014, will be ready for occupation by early 2016.

The entire mixed use Urban Square, including the Apex, has now also been registered with the GBCSA for a Green Star rating.