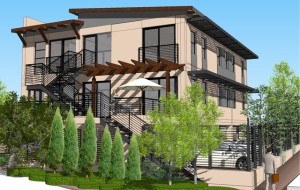 Baroque Medical, suppliers of medical equipment and pharmaceutical products, has acquired a new standalone 360 square metre office building currently under construction at Century City.  The building will serve as the new Cape Town offices for the Johannesburg-based company which has outgrown its current premises in the Cape Town CBD.
The purchase price of the building, which consists of a semi-basement, ground and first floors and has a total of 16 parking bays most of which are covered, is just under R6,8million.  The new building is being constructed in Century City’s Canalside precinct on a site overlooking the 16ha Intaka Island nature reserve and adjacent to the new head offices of Aurecon which is also currently under construction.

Known as the Book-End Building because it is the bookend to the Canalside  precinct, it been designed to compliment the existing six office buildings in Canalside as well as addressing itself to the new Aurecon building, the latter of which is going after Cape Town’s first four-star Green rating. One of the most outstanding features of this building is the vertically landscaped internal courtyard, stretching through both office floors, and open to the sky, allowing lots of natural light and air to flood into the surrounding offices.

Architect Wim Coetzee of Century City–based MaC Architects, says this contributes to a general sense of airiness and well-being and at the same time reduces the need for air conditioning and lighting of “deep-space” .  The aesthetics of the building blends effortlessly with both the Canalside buildings and the new Aurecon building – completing the entire mini-precinct as a harmonious whole.  Both the Aurecon and Book-End buildings have been designed by MaC Architects. The completion of the Bookend building marks the completion of Canalside, home to six other standalone buildings, all with penthouse apartments on top, originally conceptualized and designed by MaC Architects in 2003.

The Book-End building is on schedule for completion towards the end of July with occupation set for end August.