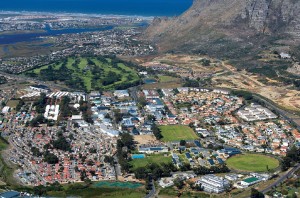 The 95 hectare Westlake development at the southern end of the Constantia Valley has been given this year’s SA Property Owners’ Association Green Spiral Award.

The award is made annually in recognition of a development which has “contributed most to the upliftment of society and the environment”. The SAPOA citation records that five years ago this area was state-owned land on which some 3 000 squatters were living.

Today, says Leslie Viljoen of the development facilitators Rabie Cavcor (Rabcav), it is widely regarded as the best mixed-use development in the Western Cape, and the best example so far of how wholly effective public-private sector partnerships can be. “Westlake has already attracted R1.5 billion in investment,” said Viljoen, “and the estate, now completely sold out, has on an almost useless tract of land created seven profitable precincts.” These are:

•  A 150 000 sq.m business park where resales are changing hands at over R450 per sq.m
•  20 000 sq.m of A-grade landscaped office park
•  The Silvertree residential development with 180 stands. (The average resale price of a plot is now nearly R1m and homes range in price from R2m to R4.5m)
•  A 10 000 sq.m office and retail centre, Westlake Square. l A 4 000 sq.m retail and lifestyle centre, Steenberg Lifestyle centre, anchored by a Pick ‘n Pay Family store
•  Reddam School with full sports facilities catering for 1 600 pupils to grade 12
•  The US Consulate, which is now under construction

“Perhaps most important of all the achievements, however,” adds Viljoen, “is that two totally dysfunctional hospitals and a home of refuge have been demolished and relocated and no fewer than 700 squatter families, who were living on the site in appalling conditions, have now been rehoused, at no cost to themselves, in two-bedroomed homes with electricity, cavity walls and tiled roofs.”

Today these homes have a value of over R75 000 each. What lessons can be drawn from the Westlake experience? Looking back on the five arduous years of the process, Viljoen says that while public-private sector partnerships can, throughout South Africa, unlock prosperity and create wealth, those involved have to be aware that total transparency and openness as well as incredible patience are essential to success.

Both John Rabie of Rabie Property Projects and Viljoen have said that they were often up against what seemed to be insurmountable obstacles and that they often had the feeling it would be impossible to get people to buy into their vision.