Little Moorings, an exclusive new niche development of 39 sectional title apartments, 33 of which are water-fronting, is being launched at Century City by Rabie Property Group.

Comprising studio, one and two bedroom apartments, Little Moorings will boast beautifully landscaped, private gardens fronting onto the water. There will also be a private jetty from which residents can launch their canoes.

Designed by architect Gisele Vanderstraeten, the architectural style of Little Moorings is contemporary yet sophisticated allowing for a lock-up-and-go lifestyle and complements the neighbouring award-winning residential development, Bougain Villas, also designed by her..

“The architecture introduces the use of traditional materials such as timber, light cladded stonework and steel. Walls will be painted with various taupe tones while the general principal is to create as much variety and interest as possible with regard to detailing, particularly in regard to the varied falls of monopitch roofs,” she said.

The interior layouts are modern open-plan living areas providing views over the landscaped gardens and waterways towards Table Mountain while the generous balconies to the interior living areas of all units will ensure a free-flow interior/exterior entertainment area.

A number of energy saving measures are being installed which will substantially reduce owners electricity bills. These include a new hot water heating system that eliminates the use of the element in the geyser, gas hobs instead of electric and energy saving bulbs throughout.

All 13 top floor apartments will have built-in braais with chimneys at different heights to create an interesting skyline.

Set over basement parking, the three storey building will have two staircases and an elevator which is not usually a feature in three-storey walkups.

All apartments will have at least one undercover parking bay with two bays provided for some of the two bedroom apartments.

The site will be secured by means of perimeter palisade fencing with access control.

Construction is expected to start in May with transfers anticipated to take place mid-2011.

John Chapman, a director of Rabie Property Group, said this was the first niche residential development of this size to be developed at Century City and the first development they had publicly launched there in 20 months.

“We believe the market fundamentals are now right, namely interest rates are low, bank finance is more freely available, and building costs are down due to lack of new work. In addition, purchasers will take possession of their units in mid-2011 when we believe the markets will have recovered further.”

Chapman said the residential property market at Century City, which has also seen more than R1billion in new commercial property investments in the past 18 months, had proven resilient through the downturn.

“We are definitely seeing a pickup in both sales and resales, the latter of which are continuing to show significant capital growth for investors. There have been two recent sales at the Island Club, for example, where units have been resold at a 200% to 300% premium on their original selling price five years ago.”

He said continued strong demand for rented accommodation in Century City was also underpinning sales to investors who were having no problem in finding tenants.

“In fact many of the agents are reporting a shortage of rental stock which has seen rentals rising significantly in the past year or so.”

For further details on the launch, which takes place on 25 February, contact Rob Downey of Property World, the official on-site agency, on 021 5550105. 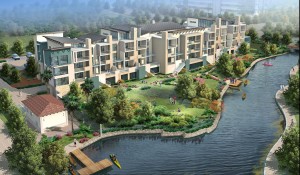