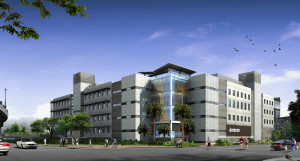 An artist impression of Aurecon

A new 7000 square metre “green” regional office block will be built at Century City for Aurecon, an engineering, management and specialist technical services group formed through the merger of leading engineering consultancies, Africon, Connell Wagner and Ninham Shand.
Being developed by Rabie Property Group at a cost of R150million, the four storey will be built according to environmentally friendly principles in the hope of achieving Green Star accreditation from the Green Building Council of South Africa.

Jeff Robinson, Principal Engineer and Sustainable Buildings Group Leader at Aurecon, says that the current economic situation has meant that, generally speaking, large project owners are starting to question the possibility of prioritising their overall spend in order to ensure they occupy a ‘sustainable’ building.

“The latter underscores the principle of investing in order to gain future paybacks. The ‘credit crunch’ has taken its toll, but this is not to say that sustainability is now on the back burner. If anything, becoming more energy efficient is an area of increasing priority as companies become more prudent about expenditure and ensure the design of their premises minimizes future expenditure,” he says.

Aurecon recently took a decision to consolidate its Cape Town operations from the Cape Town CBD and two other buildings at Century City, into a single location and the group identified the move as the perfect opportunity to demonstrate their commitment to sustainable development.

“The tangible benefits of going green are innumerable- and this is a facet of construction South African project owners have caught on to quickly. Higher tenant demand, lower vacancies and lower energy and water costs have meant many developers are taking a long-term view of their investment,” explains Robinson.

Aurecon will be responsible for all the engineering design disciplines on the project. No stranger to the green building arena, Aurecon fulfilled the role of mechanical engineer on Phase II of Nedbank’s head office in Sandton, Johannesburg, which was certified as South Africa’s first Green Star SA Building under the Green Building Council South Africa’s (GBCSA) Office v1 rating tool.
Colin Anderson, Rabie Property Group’s development manager, says that in their quest for a Green Star rating, the professional team and building owners are taking into account Management, Indoor Environmental Quality, Energy, Water, Transport, Materials, Emissions, Land Use & Ecology and Innovation.
The Century City offices will be constructed on a site overlooking the man-made Intaka Island nature reserve which forms part of the environmentally friendly storm water system adopted at Century City. Its extensive green building measures will increase overall construction costs by 8% to 10%, most of which will quickly be recouped through significant energy savings and reduced operational costs, he says.

The building, which will be constructed on a podium covering a naturally-ventilated semi-basement of covered parking, is being designed by Maas & Coetzee Architects. Its orientation will ensure maximum indirect sunlight and the reduction of east and west direct sunlight.

Other green measures will include:

– State-of-the-art air-conditioning and natural ventilation systems
– A Building Management System which will control and monitor energy consumption
– Grey water irrigation and the harvesting of rain water for toilets.
– Passive design by Maas & Coetzee Architects will ensure the building is optimally orientated and designed to receive maximum indirect sunlight and to reduce east and west direct sunlight
– High-performance glazing will be used on the windows to reduce glare and radiant heat
– All work stations within the premises will have a view of the outside environment, maximising staff productivity and lessening the effects of ‘sick building syndrome’.

Construction is due to start in June this year with occupation set for July 2011.

“We build buildings for people. The heating, access, views and fresh air are all aspects driven by the ‘human’ factor of construction. Companies are slowly starting to realise that greening a building is part and parcel of this philosophy. Investing in a building means a company empowers their people with a better future,” concludes Robinson.