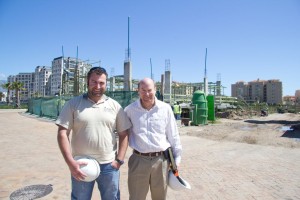 At a time when many construction companies are struggling and downsizing, Big Ben Construction, a niche operator based at Century City, has not only survived but has more than tripled its turnover.  Managing Director Colin Ridley said Big Ben  Construction has committed contracts totalling around R280million in the pipeline and they were working to full capacity.

The company, which started off with one major client – the developer of Century City 15 years ago, has grown its turnover exponentially in recent years by diversifying into commercial construction.

“When Rabie Property Group acquired the undeveloped land and associated rights at Century City in 2004 Big Ben had a turnover of around R30million and was completely focused on the residential  market, particularly in the Century View precinct where we developed around 350 free standing homes over a four year period.   From there we moved to the Bougain Villa residential development – which was named the best residential development in South Africa by SAPOA in 2009   – to build freestanding homes but our big break came when we were awarded four of the sectional title blocks in the same development.”

At the same time, Big Ben secured its first commercial project – the FNB offices in The Estuaries development, also at Century City which was followed by a second office block, for Philip Morris  in the same development.  Then followed a number of buildings at Central Park at Century City including the new offices for the Century City Property Owners’ Association, The Clubhouse as well as a small office block.

“Also at that time we started on Waterstone West which, at 7000 square metres, was the largest development we had as yet undertaken.”

Big Ben, which has a staff complement of just over 40 people,  was also responsible for the luxury freestanding homes on Waterstone Isles and the Waterstone project in its entirety was named best residential development for 2010 by Sapoa.

This was followed by the 42 unit Little Moorings sectional title development also at Century City where Big Ben implemented a number of green initiatives. These included the central heating of water via a heat pump system situated on the roof which they are now incorporating into other developments.

Ridley says there was no doubt Big Ben’s diversification into commercial construction had enabled them to ride out the recession.  “Fortunately the two markets tend to follow different economic cycles  and if a construction company is adept and comfortable with both types of construction which Big Ben is, it is easier to keep a more consistent flow of work which is critical to our industry to retain the skills acquired and developed in previous projects.”

“Residential  construction tends to be to a high specification and as such forces one to have an eye for detail.  We believe it is this experience and our commitment to quality which has seen our clients return time again.”

He said they were particularly proud of the fact that work completed to date had included some specialist tenant installations for among others, a dental practice, a dermalogical practice, a publisher, a “green “ building for the Intaka Island Environmental Education Centre and two restaurants, namely  Crave and Jacqui O.