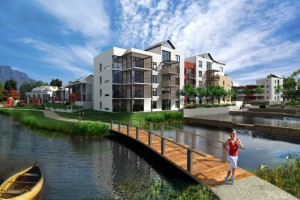 Buyers snapped up 28 of the 63 apartments and townhouses in Quayside, Rabie Property Group’s latest development at Century City, in the first two days of it being launched.  The total rand value of the sales was more than R41,5 million.

Brian Usher of Property World, the official on site agents for Century City, said the response from buyers had been exceptional and exceeded all expectations.  “This is the first large development to be launched at Century City this year and there was obviously some pent up demand from potential purchasers who have been waiting for a new release in the precinct.  Over and above this, much of the demand for Quayside is due to its being such an exceptional product – as most apartments are north-facing and water-fronting – offering real value for money.”

He said with building costs the lowest they have been for years, and interest rates at an all-time historical low, it was highly unlikely that apartments and townhouses of this quality would be brought to the market anywhere close to these prices again.

“With an average selling price of under R16 000 per square metre, now’s the time to get in. By the time of transfer in mid 2013, we will definitely be looking at substantially increased capital costs.”

The focal point of the development is the internal canal, which surrounds the development on three sides to create a tranquil residential peninsula and provide shelter from prevailing winds.

It has been designed by Cape Town architect Chris Bam and comprises 22 one-bed apartments of 50 m2, 30 two-bed apartments ranging from 80m2 to 111m2, four three-bed apartments from 130m2 to 149m2, and six three-bed canal-side duplexes sized between 150m2 and 170m2 including garages. Balcony areas have not being included in these figures, and range from a Juliette balcony of 2m2 to a large entertainer’s terrace of 50m2.

Parking is provided for predominantly in a semi-basement, with ground level parking being limited to facilitate a pedestrian-friendly environment. One-bedroom apartments are each allocated a single bay, with the two and three bed units each having two parking areas, some of them being lock-up garages. Units are priced from R850 000 to R2 900 000 including VAT.

Usher said Quayside had broad-based appeal with 60% of sales to date having been to owner occupiers with buyers ranging from newlyweds to retirees.

Two showhouses are currently under construction and will be available for viewing from early next year while a model of the development is on show at Rabie’s onsite sales centre.