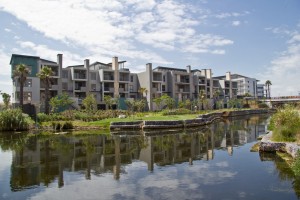 Little Moorings, the first new residential development to be built at Century City in the past 18 months, is nearing completion with transfers scheduled to take place next month.
Comprising 42 studio, one and two bedroom units, Little Moorings is the first new development to be linked into Century City Connect, Century City’s revolutionary fibre optic open access network. This is providing the country’s fastest “last mile” open access network over which a select number of Internet Service Providers (ISPs) can offer  those living and working in the precinct the fastest voice, broadband and multi-media services.

Brian Usher of Property World, the official on-site agency at Century City, said only two of the 44 apartments remain to be sold.

He said a number of buyers at Little Moorings were investors who had bought to let and tenants were snapping up these apartments, many of which are water facing.

“There is no doubt Century City Connect has been an additional drawcard with tenants prepared to pay a premium to stay there. One bedroom apartments are fetching rentals of between R6500 and R6800 per month and two bedroom units from R8800 to R9000.”

“Each of the apartments in Little Moorings has a termination point enabling residents to connect to data, multi-media, broadband  and voice services.  In addition, residents will receive normal free to air TV channels and can simply plug in their DSTV or Top TV decoders and thus be spared the inconvenience and expense of installing satellite dishes for paid TV channels.”

Usher said users would  also not have to go through the lengthy process of applying for a traditional landline as phone connections are provided for in the various ISP packages through Century City Connect’s network.

“In addition, various broadband packages are available from the different ISPs and users will be able to select a tailor made package from one of the selected ISPs to suit their needs and pocket.”

Because the ISPs have not had to incur major costs in taking fibre or copper wiring to Little Moorings, residents will not be required to enter into long term contracts and as such if they are unhappy with the services provided they can easily swop to another accredited ISP.

A Simulation Centre for Century City Connect has been established at Crystal Towers at Century City where the benefits of operating broadband can be demonstrated with a more limited bouquet of services available for inspection at the show apartment at Little Moorings.