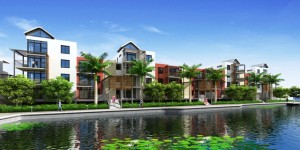 Quaynorth, an exclusive, niche development of 28 apartments, 26 of which are water fronting, is to be built at Century City by Rabie Property Group.

The development follows the successful launch of a neighbouring residential development, Quayside where 51 of the 63 apartments and townhouses, have been snapped up by buyers since its launch late last year. Total sales at Quayside to date have topped R76 million.

Brian Usher of Property World, the official onsite agents at Century City, said most of the units in Quaynorth will have both North and South facing windows and balconies providing both optimal natural lighting as well as wind-free  outdoor living options.

Usher said that the units were on average larger than those in Quayside and other recent developments at Century City and offered exceptional value for money. Prices are averaging R14 100 per square metre including balconies.  “As with Quayside, extensive planning has gone in to Quaynorth. With both developments the developers carefully assessed what the strongest selling factors had been in previous residential developments undertaken at Century City and have incorporated many of these elements into their design and specification.  Quaynorth would be centrally located within Century City, adjacent to the award winning Waterstone development and in easy walking access of many of Century City’s amenities including Canal Walk shopping centre, Intaka Island nature reserve and the Century City Clubhouse and sports Oval. It would also be within five minutes walking distance of the new private school, Curro Century City, which opens in January 2013.   In fact residents at Quaynorth and Quayside will not even have to cross a road to get to the school.”

Usher said Quaynorth will also link into Century City ‘s recently launched open access Fibre-to-the-Premises network which is offering residents access to the country’s fastest voice and broadband services as well as multi-media connections.  Known as Century City Connect, the fibre optic backbone is “carrier neutral” which means residents are not be tied in or forced to use any specific voice or Internet Service Provider (ISP). Instead they have a choice of a number of pre-selected blue-chip ISPs to choose from that are hosting their services in a purpose built Century City Connect Data Centre.

Other innovative amenities within the development include a central hot water system which will not only save space in each apartment but will also be more energy and cost efficient than individual geysers.

Both Quaynorth and Quayside, which are on separate erven, form part of The Quays development which will also include 3500 square metres of low rise studio offices set around courtyards.

Construction of Quaynorth is expected to start in September 2012 with transfer scheduled towards the end of 2013.

For further details contact Property World on 021 5550105 or Brian on 0825717024 or visit the Century City Sales Centre near Central Park, opposite the entrance to Intaka Island.