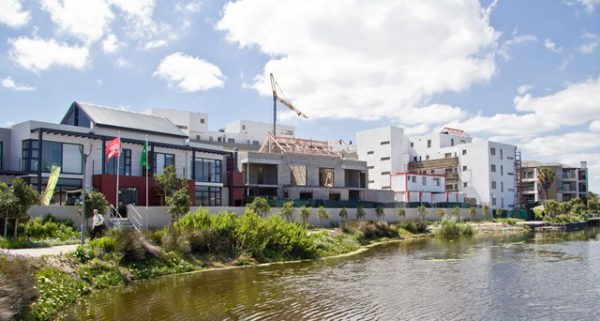 Strong residential sales in Century City over the past 15 months, have far exceeded expectations and are prompting further new development.

Miguel Rodriques of the Rabie Property Group said more than 90% of the 57 water fronting apartments and six double storey townhouses at their Quayside development had been snapped up seven months ahead of completion.  The remaining apartments, which are available for purchase in Quayside, are all 2 bedroom units ranging in size from 84m² to 111m² and priced from R1,560,000

“And sales at the adjoining Quaynorth development have also been strong with 18 of the 28 units having been sold before construction started this past week.  This development is only due for handover in early 2014.”

The remaining two and three bedroom units, which are priced from R 1,520,000 to R 2,450,000 are on average larger than most other developments in the precinct. They will have both North and South facing windows and balconies providing both optimal natural lighting as well as wind-free outdoor living options.

Rodrigues said that total residential sales – both development and resales – undertaken by Property World, the official on-site agency at Century City had exceeded R390million in the past 15 months.

“And if sales continue at this rate we will shortly run out of stock which is why we are working around the clock to try and accelerate further new development.

“This has also resulted in resale values increasing as demand outstrips supply and those investors that have held on for the last few years are now enjoying good capital appreciation.”

He said planning for a new residential development comprising a total of around 145 apartments and a few stand- alone villas was well advanced. This project will be built on a site adjoining the new Curro private school that is under construction but due to open in January 2013.  “The school has definitely been a catalyst for the increase in residential sales and we expect it to continue to be so going forward.”

Rodrigues said they hoped to be in a position to release the first phase of around 40 units before the end of the year.