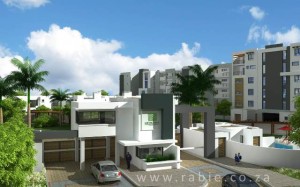 Silvertree, a new block of 31 apartments, is being launched at Century, the burgeoning mixed use development in Cape Town, by leading developer, Rabie Property Group.

The development forms the second phase of the R270m Ashton Park residential project and follows the success of phase one, Waterberry, where 32 of the 43 units have been sold since its launch earlier this year.

Project manager Miguel Rodrigues said sales at Waterberry had exceeded expectations with close to 78% in value sold requiring they now accelerate the development of Silvertree to meet ongoing demand for homes at Century City, particularly those in close proximity to the Curro Private School which opened in January.

Silvertree, he said, would not only be built on a site adjacent to the school but would enjoy tranquil views over the tree lined sports field and Helderberg Mountains.

“Comprising  one, two and three bedroomed units and one four bedroom penthouse, Silvertree apartments are generous and range from 87m2   to 287m2, including balconies.  Apartments will be selling for between R1 185 000 and R2 385 000, including VAT, while the penthouse will have a price tag of R3 995 000.

“These prices represent an average selling price, including balconies, of R15 555 per square metre. This is incredible value for money given that transfer of these properties is scheduled for end 2014.”

Rodrigues said the apartments were larger than usual as they anticipated that there would be a large number of owner occupiers, including families, due to the proximity to the school as had been seen at Waterberry.

He said the four story building, which is being financed by Nedbank and built by Big Ben Construction, will offer basement parking and a lift. All two and three bedroom apartments will get two dedicated parking bays.

When completed Ashton Park will comprise a total of 140 apartments in four sectional title blocks and seven freestanding villas.

He said that the Century City Property Owners’ Association, the non-profit company that is responsible for the day to day operations of Century City, conducts bi-annual Customer Satisfaction Surveys and the results of the last survey had been used to inform the design brief of Ashton Park.

The energy efficient building was modelled by state-of-the-art software to ensure full compliance with the energy regulation SANS 10400XA.