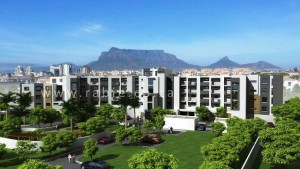 “Considerably higher rentals are being achieved at the super luxurious Crystal Towers Residences – R15 000 for a two bedroom unit and R45 000 for a four bedroom penthouse – but these rentals are not indicative of the Century City market as a whole.”

Usher said rental growth at Century City was outstripping other areas as it had become an extremely popular residential node due to its centrality, relatively high levels of security and infrastructure and the wealth of world class amenities – from Canal Walk shopping centre, to the Virgin Active, restaurants, spas etc. all within easy walking distance.

Usher said Property World now had more than 200 rental properties on their books with little or no vacancies.  “In fact we have a waiting list of tenants with properties being snapped up usually as they come on the market.”

Strong rental demand, he said, was also creating a lucrative opportunity for investors who are seeking to invest in the “Buy to Let” market.

“This is one of the reasons we have seen 80% of the Waterberry units in Ashton Park, Rabie’s latest residential development at Century City, already being sold, prompting the release Silvertree, the second phase of the development.”

Usher said due to the increasing size of their rental portfolio they had recently adopted the PayProp system – which has grown to be the largest processor of rental payments for the property management industry since it was launched in 2004.

“This allows us to offer a much more professional service with both landlords and tenants able to access their statements on line and to get detailed reports for tax returns.  In addition, it benefits us as managing agents, providing us with comprehensive marketing reports on line.”

He added that PayProp also offered a deposit guarantee service.

“With our relatively high rentals this is extremely important as tenants often do not have ready cash to cover the required two or three months’ rental deposit.  For a small monthly premium, PayProp will offer a deposit guarantee which satisfies landlords and does not drain the cash resources of tenants.”