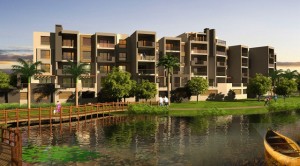 An artist impression of Waterberry

Waterberry, the first phase of Ashton Park, a new R245million residential development to be developed at Century City by the Rabie Property Group, is to be officially launched on 21 February.

The last water-fronting residential development planned at Century City, Waterberry comprises 43 one, two and three bedroom apartments ranging in size from 87 m2, including balcony, for one bedroom apartments  up to 192 square metres, including balcony, for the three bedroom units. There are also two duplex penthouses of 170 square metres.  Prices range from R1 195 000 to R2,695 000.

The four storey Waterberry building, which is to be built on the water’s edge next to the hugely successful Little Moorings development, will offer basement parking, a lift and 24 hour access control.

Project manager Miguel Rodrigues said unit sizes were generous and larger than usual as they anticipated a large number of owner occupiers including families due to the close proximity of the new Curro Private School which opened in January and which was proving to be a very strong draw card.

Construction of Waterberry is programmed to break ground in March 2013 and due for completion in May 2014.

When completed in August 2015, Ashton Park will consist of 140 apartments in four sectional title blocks and seven villas.  The entire development is being financed by Nedbank Corporate Property Finance.

Rodrigues said feedback from buyers in earlier residential developments at Century City had influenced the design of Ashton Park.

“The Century City Property Owners’ Association, the non-profit company that is responsible for the day to day operations of Century City, recently conducted its bi-annual Customer Satisfaction Survey and the results of this survey have been used to inform the design brief of Ashton Park.

“Respondents were asked what they most liked about where they lived and what they would change if they could and as a result we have introduced a number of parks and green spaces, as well as a swimming pool with change rooms and recreational facilities in the overall development plan of Ashton Park.”

He said the launch of Ashton Park had been accelerated following the strong demand for units in two current developments – Quayside and Quaynorth which are both still under construction and where 93% of the 91 apartments have been sold to date.

To be invited to the official launch of Waterberry at Ashton Park contact the on-site sales agents at  Property World  on 021 5550105.