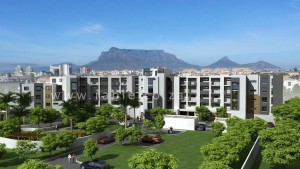 Following a flurry of activity in the past week,  33 of the 43 apartments in the Waterberry residential development now under construction at Century City have been sold or reserved.

Launched in late February, Waterberry is the first phase of Ashton Park, a new R245million residential development providing a total of 140 apartments in four sectional title blocks and seven villas that is being developed by Rabie Property Group and financed by Nedbank Corporate Property Finance.

Brian Usher, sales manager of Property World, the on-site official sales agents at Century City, said 23 apartments had been sold with a further  10 reserved by serious purchasers.
“This represents 77% in number of units and 80% in value and we expect most if not all of these to be confirmed shortly,” he said.

Comprising one, two and three bedroom apartments, priced from R1 195 000 to R2 695 000, and ranging  in size from 87m2 to 192 square metres, including balconies,  Waterberry is the last planned water-fronting residential  at Century City and is being built on a site bordering the new Curro Private School that opened in January.  Waterberry is due for completion and handover in May 2014.

Usher said the apartments were larger than usual as they had  anticipated a large number of owner occupiers including families due to the proximity to the school and sales to date had borne this out.

“More than half of sales so far have been to buyers looking to live there themselves.”
Each unit will have access to Century City Connect’s world class fibre optic connectivity and will benefit from individually metered hot water supply from centralised bulk hot water storage heated by highly efficient heat pumps.