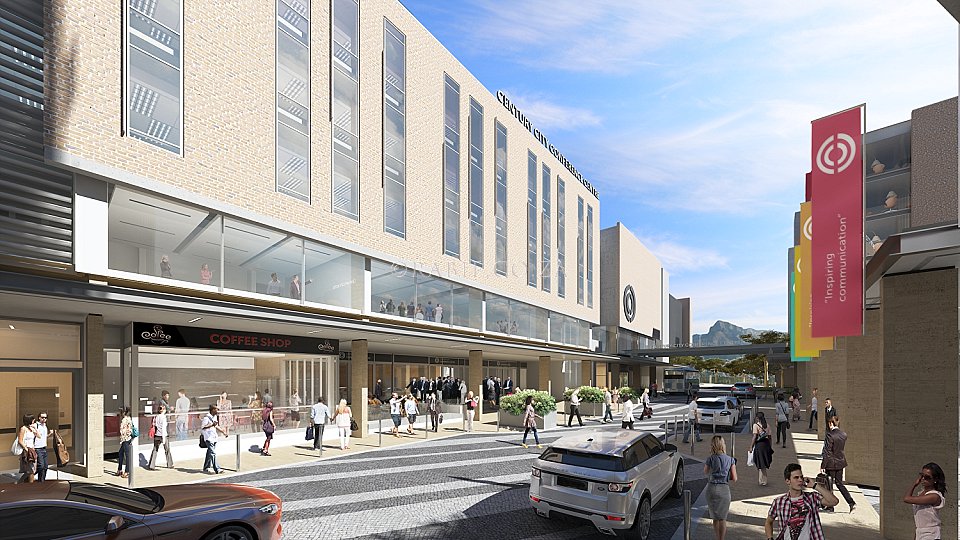 A Century City conference centre, with a total capacity of 1900 in 20 venues, and a 125 room hotel are to be built around a new public square in Century City as part of a R1billion mixed use development in the Bridgeways precinct.

Greg Deans, a director of the Rabie Property Group, said the development was in response to soaring demand for conferencing and hotels in the burgeoning precinct and had been designed to complement Cape Town and Century City’s existing facilities.

“Not only will it fill a gap in the market but we believe it will help cement Cape Town’s established attractiveness as a conference destination.”

It will also offer 12 meeting and breakaway rooms and a business lounge on the first floor able to accommodate around 200 delegates.

Deans said the average hotel occupancy at Century City, which currently has a total of 460 rooms in five hotels, was running at over 73%.

Century City’s popularity as a hospitality node, he said, has grown phenomenally in recent years in tandem with the growth of the precinct which is now home to more than 500 businesses and with more than 260 000 square metres of offices is currently the third largest commercial precinct in Cape Town.

“And the existing conference facilities, which range from 20 seat venues to a 300 seat facility, are unable to keep up with demand and have had to turn away business, particularly for larger conferences.”

Deans said over and above the CCCC and hotel, the mixed use development will include offices, showrooms, residential apartments and service retail and a five level parking garage with direct access to the CCCC.  The entire development will be set over a super parking basement which, together with the structured parking, will provide a total of 1300 bays.

Anchoring the development will be a bustling, multi-functional Square on to which restaurants and the other hospitality elements will flow.

“Every city should have at least one public square that offers a dynamic, vibrant and safe environment for the public to enjoy.

“CCCC is one of three buildings that will form the focal point of The Square, a beautifully proportioned space that will offer users the opportunity to socialize, relax, dine and be entertained.

“It has been designed as the hub and pivotal node of this precinct that will influence and generate future planning of its surrounds. The strong architectural form and aesthetic of the conference centre has been taken through to the Century City Hotel to form a L –shaped footprint that is then offset by the more sculptural and whimsical sheer glass façades of the 7 storey freestanding office building that forms the balance of The Square. This environment is further enhanced by the introduction of the extended canal system of Century City and bold landscaping themes.”

Murray & Roberts have been appointed contractors and have moved on site with all components of the development scheduled for completion by end 2015 and the first conferences expected to be hosted in early 2016.

The Architect for the project is Vivid Architects while Source have been appointed Interior Decorators for the CCCC and Origin for the Hotel.

For further details contact Greg Deans on 021 550 7000 or go to www.centurycityconferencecentre.co.za