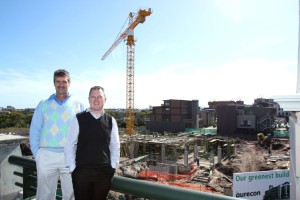 Coenie Fick of Aurecon and Colin Anderson, a director of Rabie Property Group, on the site where construction of Aurecon’s new R150million offices is now underway.

The first construction crane to grace the skies at Century City in almost a year has gone up.

It has been erected for the construction of a new 7000 square metre “green” regional office block for Aurecon, an engineering, management and specialist technical services consultancy group formed through the merger of Africon, Connell Wagner and Ninham Shand.
Being developed by Rabie Property Group at a cost of R150million, the four storey environmentally friendly building, which is being constructed by Stabilid, is aiming to achieve a Green Star SA – [Office Design v1, Office As Built v1] rating with a view to achieving Green Star accreditation from the Green Building Council of South Africa.
The last construction cranes seen at Century City were for the mega R750million Crystal Towers development and two high-rise office developments, Gateway and The Gatehouse.
Greg Deans, director of Rabie Property Group, the developers of Century City, said while one crane was a far cry from three years ago when the skyline was dotted with 12 or so cranes, it was cause for cheer and hopefully indicative that the market was now turning.

“We have generally tended to see the number of cranes at Century City as being a barometer of the state of the property market. Although some low-rise construction has been taking place in the past year, the dearth of cranes which are used on larger, high-rise projects is very indicative of the hard times the industry has been experiencing.”

Deans said during the upturn they had colloquially referred to the yellow cranes as the “national bird of Century City”.

“And it is heartening that the first bird is back although we are probably still some way off before the whole flock returns!”