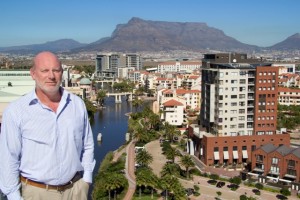 The built form at Century City has more than tripled in the past eight years and now stands at over 850 000 square metres with total investment to date totalling about R17billion.

Chris Blackshaw, CEO of the Century City Property Owners’ Association (CCPOA), the non-profit company responsible for the day to day running of the 250 hectare precinct,  said that in 2004 when the Rabie Property Group acquired the remaining undeveloped land and associated rights, the built form on site had been just over 280 000 square metres.

“The massive surge in development since then has required a concomitant increase in infrastructure and services including the widening of Ratanga Road and the construction of additional internal roads of which there are now 8,6km. The CCPOA is also currently responsible for the maintenance of 7,5km of canals and gabion edges, 925 street lights, a water treatment plant, 18 irrigation and recirculation pumps, as well as 22 bridges and 12 guardhouses to mention just some.”

Blackshaw said Century City had truly become a city within a city with an estimated 50 000 people now living and/or working  there.  “While many travel to and from by car, we have a very strong public transport offering with 166 mini bus taxis contracted to operate to Century City, 98 Golden Arrow bus trips daily and close on 5500 commuters a day using the new Century City Railway Station.  The internal shuttle bus service which operates every 10 minutes between the public transport interchanges and the rest of Century City in peak periods and every 15 minutes in shoulder periods transports around 4000 passengers every day while a further 7000 or so pedestrians walk between the Ratanga Road Public Transport Interchange and Canal Walk daily.”

He says the CCPOA, which acts like a mini-municipality, was responsible for among other things safety and security in the precinct, public transport, access and traffic control, maintenance of all infrastructure and common areas, landscaping of all public areas (which includes 80 000 square metres of grassed area and a further 53 000 square metres of planting), conservation and management of Intaka Island nature reserve and storm water management.

All property owners at Century City automatically become members of the CCPOA either directly or through their Home Owners’ Associations or Body Corporates.  In 2005, the year Blackshaw joined the CCPOA from the Cape Town City Council where he had been a director; there were 44 members which has almost tripled to the current 125.

The CCPOA is largely funded via a monthly levy system on owners and its operating budget is currently around R30million per annum compared to R14million in 2005.
Blackshaw said in addition to Century City’s central location and well maintained infrastructure one of the major draw cards for those who had relocated to Century City was its safe and secure environment.   “To this end we have a 24/7 control centre with rapid response to deal with any emergency, around 100 CCTV cameras, 30 access control booms and five response vehicles. There are 83 security officers who are deployed at key locations and undertake foot, bicycle and vehicle patrols. In addition we have two dedicated Metro Law Enforcement officers and, since the beginning of March this year, a  full-time City Traffic Officer.”

Blackshaw said Century City, which has development rights of 1,4 million square metres, was still a growing city.  “That means a further 550 000 or so square metres remains to be developed and the CCPOA will continue to grow and expand its services in line with future development.”