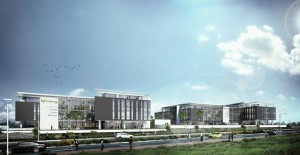 Growthpoint Properties and the Rabie Property Group are to jointly develop a 18,049 square metre office project in Century City to meet the burgeoning demand for offices in the precinct.

To be known as Bridge Park, the office development will comprise two large “green buildings” to be built on a high profile site on Ratanga Road in  the Bridgeways Precinct.

Colin Anderson, a director of Rabie Property Group, said the R425m planned Bridge Park project would be the second largest office development undertaken at Century City to date and would be built in two phases.

He said the release of new office development at Century City was tightly controlled by the landowners, Rabie, in order to protect investment values.

“This is the first time we have done a speculative development of this size and calibre which is a direct result of office vacancies in the precinct having fallen to an historic low of around 5 %.”

According to Anderson the Bridge Park project, which has been registered for a Green Star SA Office Design v1 rating with the Green Building Council of South Africa, is to be built in the Bridgeways Precinct at Century City where three other “green” office blocks are currently built or under construction.  In fact the developers are aiming for the entire 150 000 square metre precinct to be the first fully “green” precinct in South Africa

Anderson said Bridge Park was ideally suited for corporates looking for between 1500 square metres and 18 000 square metres and the  joint venture with Growthpoint, South Africa’s largest listed property fund, was a strategic tie up as it would provide future expansion options for Growthpoint’s extensive  tenant  database.

Rudolf Pienaar, divisional director of Growthpoint Properties said Bridge Park would increase their exposure at Century City by 50% and was indicative of their confidence in the future of this mixed use precinct.

To be built on an attractive green podium,  the two four storey buildings will boast striking glazed and aluminium panelled facades, large balconies and enclosed private forest spaces. Basement parking will be provided on a ratio of 3,5 bays per 100 square metres with plenty of additional parking within a short walking distance.

Construction of the first block, Bridge Park East, is due to commence by the end of 2013 with completion scheduled for early 2015.  The timing for Bridge Park West will be determined by market demand, he said.