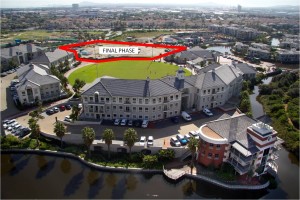 The third and final phase of Central Park, an 18 000 square metre low rise office park situated around a village green at Century City, is to be launched shortly.  This follows the successful completion of the first two phases of the development comprising 10 standalone buildings totalling around 12 000 square metres .

Giles Balmer of developers, Rabie Property Group, said sales and lettings in phase two of Central Park, the Courtyard precinct,  had gone well with one building having been let to BASF and 65% of the 18 units in a second 2200 square metre sectional title building having been sold and the balance under negotiation.

Construction of phase two is nearing completion and transfer of the units will be from August 2012.

Phase three, he said, would comprise five free standing buildings ranging in size from 768 square metre s to 2012 square metres. Construction of the first building of around 1000 square metres was expected to start shortly.
Balmer said the decision to commence construction of the final phase was indicative of the developer’s confidence in an improving property market over the next 12 months as well as a significant decrease in office vacancies within the Century City precinct.

“In fact Central Park was planned as the focal recreational hub for the greater Century City precinct and is also home to a Clubhouse, a community square and the  offices of the Century City Property Owners’ Association, the non-profit company responsible for the day to day running of the 250ha development,” says Balmer.