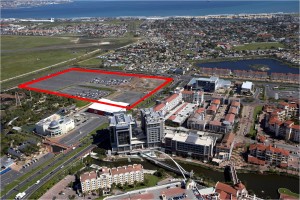 The Bridgeways precinct where two new developments are planned, a 9000 m2 office for an international company and 4000 m2 office block for a national tenant.

The latest SAPOA office vacancy survey shows that while vacancies in six out of the seven Cape Town offices nodes rose in the fourth quarter of 2011, Century City bucked the trend with vacancy levels falling to 8,5% from a high of 12,9 percent in August 2009.   The Cape Town office vacancy factor overall rose to 10,5% in the same time.

Balmer said they knew of no other office node in the country to experience this level of growth over this period.  He pointed out that the bulk of new space at Century City came on stream between June 2006 and September 2008 – a period when the node grew from 96 978 square metres to more than 206 000 square metres.  Factors contributing to Century City’s growing popularity as an office destination is its central location, its integrated new urbanist lifestyle, its high level of infrastructure, security and services; its extensive public transport offer  and the wide range of world class leisure, sports and retail amenities, including Canal Walk shopping centre, all in easy walking distance.

“The launch of Century City Connect, the first open access fibre optic network of its kind in South Africa, is certain to add to its appeal particularly among companies with large broadband requirements.  Century City Connect is providing the country’s fastest, carrier neutral “last mile” open access network over which a select number of Internet Service Providers are offering those living and working in the 250ha precinct the fastest voice, broadband and multi-media services. Because Century City’s fibre optic backbone is carrier neutral, clients are able to choose which of the accredited Internet Service Providers’ (ISPs) packages best suits them in terms of voice, broadband and multi-media services as well as cost,” he said.

Balmer said that while Century City had mushroomed in recent years, there is still a long way to go.

“Century City has total development rights of around 1,3million square metres of bulk including a total of 591 180 square metres of office space so what is here now is less than half that of when it is fully developed, “says Balmer.

He says that with its basket of rights, Century City is in the enviable position of being able to respond to cycles within the different sectors of the property market as these cycles tend to follow each other rather than overlap.

“Continued demand for office space in the precinct has prompted significant new development and 14 years after  it was launched the Century City development has matured significantly with a multi tier office market having emerged giving buyers and tenants a much broader choice of product.”

Balmer said previously all the available offices were much of a muchness in terms of quality and all was largely owner occupied.  “The precinct was not perceived to be a rental node. However, development in recent years has changed that and created a sustainable rental market with a diversity of product and rentals.”

New office developments underway at Century City include The Courtyard, which has been designed to satisfy pent-up demand for small to medium size offices in the precinct.  The 2200 square metre building, being built at a cost of R37million, will comprise 18 units ranging in size from 63 square metres to 222 square metres which can be combined up to a size of 600 square metres if required.  Prices excluding VAT but including parking and installation allowances, average around R16,750 per square metre.