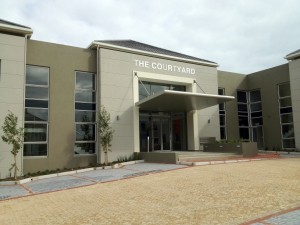 Recently completed, The Courtyard in Central Park at Century City

All 18 office suites in a sectional title office block at Century City have been sold ahead of the building being completed.
The 2200 square metre building is part of the 18 000 square metre Central Park low rise office park which is being developed around a village green.
Sedica Knight of the developers, Rabie Property Group, said the office suites had ranged from just over 60 square metres to just over 220 square metres with purchasers being fairly evenly split between owner occupiers and investors.

“In fact we have already found tenants for two of 10 investor purchasers – both for an initial period of five years – with a number of other negotiations well advanced,” she said. Both units let to date had achieved their asking gross rental of R135 per square metre.
Knight said when they launched the office block in December last year, sales had started off slowly but had picked up strongly since March as construction progressed and purchasers were able to get a better feel for what they were buying.

“We are now ready to move onto the final phase and will shortly launch the first of five buildings  – a 1000 square metre office block, which although  ideally suited for a single user looking to create a strong corporate identity, will be easily sub-divisible.”
Haupt said the Central Park development had been designed around a village green and Clubhouse which was home to a number of Century City sports clubs and hosts many community orientated functions including the Century City Natural Goods Market which is held during the good weather months.

“It is very centrally located and within easy walking distance of many of Century City’s world class amenities including Intaka Island Nature Reserve and Canal Walk Shopping Centre.”