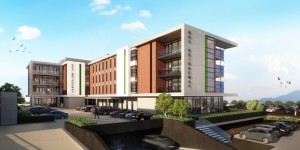 A new 3800m2 “green” office block is to be built in the Bridgeways Precinct of Century City near Virgin Active by the Rabie Property Group at a cost of around R80million.  The four storey building, Number 3 Bridgeways, will be ideal for a single corporate user but will also be easily sub-divisible for multiple users if required.

Rabie director Colin Anderson said it was being built on spec as demand for offices at Century City had ballooned with vacancies falling to a record low with little or no vacant space for 1000 square metres or more currently available.

He said Number 3 Bridgeways would be built according to green building principles and would be submitted to the Green Building Council of South Africa (GBCSA) for a Green Star Rating in both the Design and As Built categories.

It brings to three the number of office blocks already underway in the new 150 000m2 Bridgeways precinct. It follows the Business Centre and Chevron, both of which are currently under construction and both of which are also going to be submitted to the GBCSA for Green Star ratings.

Anderson said it was hoped that Bridgeways would in fact become the country’s first all “green” precinct but this would be dependent on future owners and tenants buying into the green building philosophy.   “We have included numerous green building principles in some of our previous developments in recent years, but the first time we went all out for a Green Star rating was two years ago on the Aurecon building at Century City which was the first building in the Western Cape to receive a Green Star Rating from the Green Building Council of South Africa and the first building in South Africa to be awarded a 5 Star Green Star SA – Office Design v1 rating.  However, an increasing number of companies are buying into the concept of green buildings realising that they are not necessarily much more expensive to develop and the long term benefits well outweigh any increase in building costs especially with regards to projected electricity tariff increases.
“Internationally, green buildings have been known to achieve higher rentals than lower rated ones and are in higher demand as more tenants start to demand sustainable buildings.  More tenants are starting to understand the principle of total cost of occupation and therefore are not using the gross rate / m2 as the sole determining factor when choosing new premises.   The Green Star Rating process not only strives to make buildings far more efficient, it also encourages professionals to create an environment that leads to greater productivity and happier staff.”

Anderson said a Green Rated Building was more likely to be a ‘futured proofed’ building which will result in improved rental growth and higher capital values, compared with unrated buildings which may experience longer periods of vacancy and lower rentals and potentially become obsolete.

It will be located in easy walking distance of Century City’s world class amenities including a number of four and five star hotels, Canal Walk Shopping Centre, Virgin Active and the restaurants and convenience retailing at the Colosseum and will be just across the road from a planned station for the BRT which is to be extended to Century City in 2013.
Financed by Nedbank and designed by Vivid Architects, Number 3 Bridgeways will enjoy great exposure to the busy Ratanga Road providing the occupier with an opportunity to make a strong corporate statement.