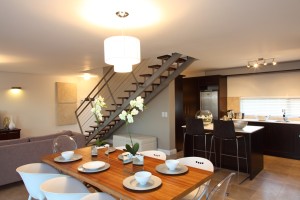 A furnished showhouse and new sales office have been completed at Quayside, Rabie Property Group’s latest residential development at Century City where 37 of the 63 apartments and townhouses have been sold since its launch late last year.

Brian Usher of Property World, the official on-site agents, said total sales in the development to date had exceeded R48million.

“The market response to Quayside, which is the first large development to be launched at Century City for more than a year, has been exceptional and with the showhouse now completed and potential buyers able to see the quality of product on offer we expect strong demand for the remaining units.”

Being developed in the heart of Century City close to Central Park and Intaka Island and in easy walking distance of Canal Walk, Quayside comprises 57 apartments and six double-storey canal-front townhouses. These include 22 one-bed apartments of around 50 m2, 30 two-bed apartments ranging from 80m2 to 111m2, four three-bed apartments from 130m2 to 149m2, and six three-bed canal-side duplexes sized between 150m2 and 170m2 including garages. Balcony areas have not being included in these figures, and range from a Juliette balcony of 2m2 to a large entertainer’s terrace of 50m2.

The focal point of the development, which has been designed by architect Chis Bam, is the internal canal, which surrounds the development on three sides to create a tranquil residential peninsula and to provide shelter from prevailing winds. Most of the apartments are north-facing and all are waterfronting.

Parking is provided for predominantly in a semi-basement with one-bedroom apartments each allocated a single bay, with the two and three bed units each having two parking areas, some of them being lock-up garages. Units are priced from R850 000 to R2 900 000 including VAT.

Quayside will be the second residential development at Century City to be linked into Century City Connect, Century City’s revolutionary fibre optic open access network. This is providing the country’s fastest “last mile” open access network over which a select number of Internet Service Providers (ISPs) can offer  those living and working in the precinct the fastest voice, broadband and multi-media services.

Financed by Nedbank, Quayside is due for completion in mid-2013.

For further information please contact Property World on 021 5550105 or visit the showhouse near Central Park, opposite the entrance to Intaka Island.