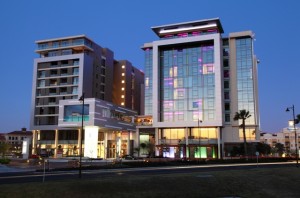 Residential property prices at Century City have broken new ground with the sale this month of a four bedroom  furnished penthouse apartment in Crystal Towers to a foreign buyer for R13,5 million.

Prior to this the highest price achieved for a property was for a freestanding home on a double plot in Waterstone Isles which sold for R10 million late last year.  Before that the highest prices achieved were for two Crystal Towers three bedroom apartments which sold for R8,2 million each. Testament to the wide variety of homes on offer at Century City is that the average selling price is normally around R1,5 million to R2 million, with entry level  being around the R1million mark.

Allen Usher of Property World, the official on site agents at Century City, said these sales had help boost total sales at Century City by them to just under R260 million since the start of the current financial year on July 1 last year.  In March alone Property World had secured nine development sales (excluding the R13,5 million penthouse) and six resales for a total value of R24,5 million which was a marked improvement on March 2011 when  they notched up 11 sales for a total of R18million.

Sales had also gone strongly in their development Quayside where only 18 units out of 63 remain to be sold at prices of around R1,5 million with transfer scheduled for end of next year offering exceptional value for money.