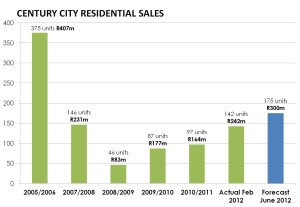 Century City residential sales secured by Property World, the official on-site agents for the developer Rabie Property Group, in the first eight months of the current financial year totalled more than R242 million – the highest level recorded in five years and almost double that of the previous year.

Allen Usher of Property World said they had notched up a total of 142 sales since July 2011 against 64 totalling R114,5 million for the corresponding period the previous financial year.

He said development sales had again accounted for the bulk of sales during the current financial year and had seen most of the stock in existing developments being mopped up and had spurred the launch of a new development Quayside where already 38 of the 64 units have been sold.

“While sales are still far off where they were in the boom years of 2004-2006 we believe that the sales to date this year could signal a turning point in the property cycle.  Investors are showing confidence in the future and taking advantage of well-priced, well-designed new development at Century City where capital values have shown resilience and, depending when one bought, significant capital appreciation.”

Usher said an added factor boosting the market was that banks have come to the party with potential buyers now finding it easier to get bond finance.  While sales had slowed during the downturn, Century City had continued to outperform the market with buyers attracted to the integrated lifestyle offered within the precinct with every conceivable amenity right on the doorstep.  This, together with its central location and its high level of safety and security, have also made homes in Century City in high demand from tenants which has further underpinned sales and seen investors returning to the market.”