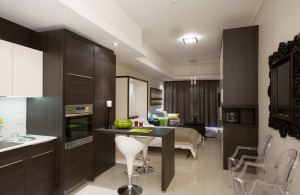 It’s official, the residential property has finally turned with sales at Century City up a staggering 150% for the year to end June.

Allen Usher, managing director of Property World, the official on-site agency for developers, Rabie Property Group, said they had secured a total of 104 sales at Century City totaling R206million for the past financial year against 46 sales totaling R83million the previous year.

“There is no doubt the market is picking up – 65% of the sales were accomplished in the second half of the financial year – and in the past month a further R25million in sales have been done with an additional R10m pending.”

Usher said it was not surprising that Century City was showing a turnaround earlier than many other sectors of the market as it had become renown for its award-winning developments and the old-adage of location being the most important criteria to consider when purchasing property still applied.

“Century City is no longer pioneering and is now firmly established as a leading suburb as borne out by an independent survey undertaken by Finweek and market research group, Ask Africa that rated it as South Africa’s best middle income area to live in.

“One cannot overestimate the value of convenience in the hustle and bustle that we live in and that is exactly what Century City has to offer.”

He said sales for the past financial year had been boosted in part by the launch of the iconic Crystal Towers development which had lifted the residential bar at Century City. Apartments in the luxury development, which also includes a five star hotel and restaurants, are selling for between R1,7million for a studio to R14million for a four bedroom penthouse.

In the first six months of this year Crystal Towers accounted for R106m of the sales, including two penthouses with price tags of R8,5million each. In July a further R20million in sales in the up market development had been achieved.

A large number of sales had also been achieved in Rabie’s Waterstone development which this year won the residential category of the South African Property Owners’ Association’s Awards for Innovative Excellence in Property Development. Waterstone is the fourth Century City development to win the prestigious award in five years.