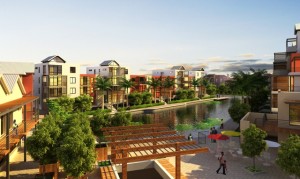 Residential sales at Century City by Property World, the official on-site agents, totalled R320million in the past  year – the highest in five years.  Of this 139 units totalling more than R241million were for new development sales while resales totalled 56 and accounted for just over R78million.

Brian Usher,  sales manager for Property World, said sales in the past year had been boosted by the  launch of a number of new developments, in particular Quayside where 92% of the 63 luxury apartments have been sold to date and Quaynorth, an exclusive, niche development of 28 apartments which was launched recently and where buyers snapped up 54% of the units in the first month.

In addition, all 42 units in Little Moorings, which was launched a year ago, have been sold for a total of R50 million while strong sales were also recorded in Crystal Towers Residence, where only 10 of the  90 luxury apartments remain to be sold.

Usher said the strong sales recorded at Century City in the past year appeared to be unique to the precinct with slow sales being reported elsewhere.

“We have truly bucked the trend. This is s no doubt a result of the benefits offered to those living at Century City in terms of its central location, its high level of infrastructure and security, its world class amenities and the integrated environment it offers with a balanced mix of residential, commercial, leisure and retail components. Also adding to its attraction was the recent announcement that a new private Curro School will open at Century City in January 2013.”

Usher said the precinct was in great demand not only with home buyers but also with tenants.

“We simply cannot keep up with the demand for rental accommodation and we have a waiting list of would-be tenants.”

He said the sales in the past year had exceeded the most optimistic expectations and had necessitated the fast tracking of the next residential development in the precinct.

“The developers, Rabie Property Group, are now in advanced planning of a new development of around 120 apartments and are pulling out all the stops to be able to launch at the end of the year.”