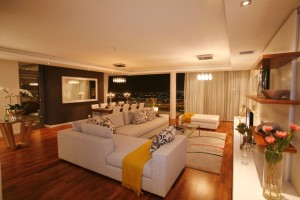 One of the penthouses at Crystal Towers Residences

Residential property sales at Century City concluded by Property World, the official on-site agency, doubled in the first five months of this year compared to the corresponding period in 2010.

Manager Brian Usher says a total of 56 sales were achieved by Property World for the 2011 reporting period against 29 in the first five months of last year.  “The market has been extremely tough for the past couple of years but since the beginning of this year we have seen sales ticking up steadily and believe the market is now turning the corner.”  He said in May alone they had had 15 confirmed sales – 9 developer sales and six resales – the most they had achieved in a single month since January 2009.   Of the May sales, eight had been achieved in Little Moorings, Rabie Property Group’s latest residential development at Century City, construction of which is due for completion at the end of the year. There had also been one sale each in their Manhattan and Waterstone Isles developments while four of the resales had been in Bougain Villas, one in Waterstone West and one in Villa Italia. The total value of sales in May was in excess of R25million with units sold ranging in price from starter homes at R780 000 to a R5million penthouse in Manhattan. Earlier sales this year had included two R8,4million  penthouses in Crystal Towers.  Usher said June, which is traditionally a slow month, was also looking relatively good.   “Last year we only had three confirmed sales for the whole of June but in the first 10 days  of this month we had already signed up four resales  with  a total of R5 225 000 and two development sales with a value of R4 380 000 and there are quite a few more sales in the pipeline.”

“There are also a handful of freestanding homes available from R3.530,000 to R5,018,000.”  Usher said the strengthening market was seeing a strong take up of Rabie’s existing stock at Century City.  “If the market continues to pick up we could well face a shortage of stock by year end and are in the final planning stages of a new sectional title apartment development comprising 85 units, most of which will be water fronting, which we expect to be able to push the button on by year end.”

Usher said that in spite of the tighter credit environment under the National Credit Act, the vast majority of purchasers at Century City were now qualifying for bonds as valuers perceived value in these properties.