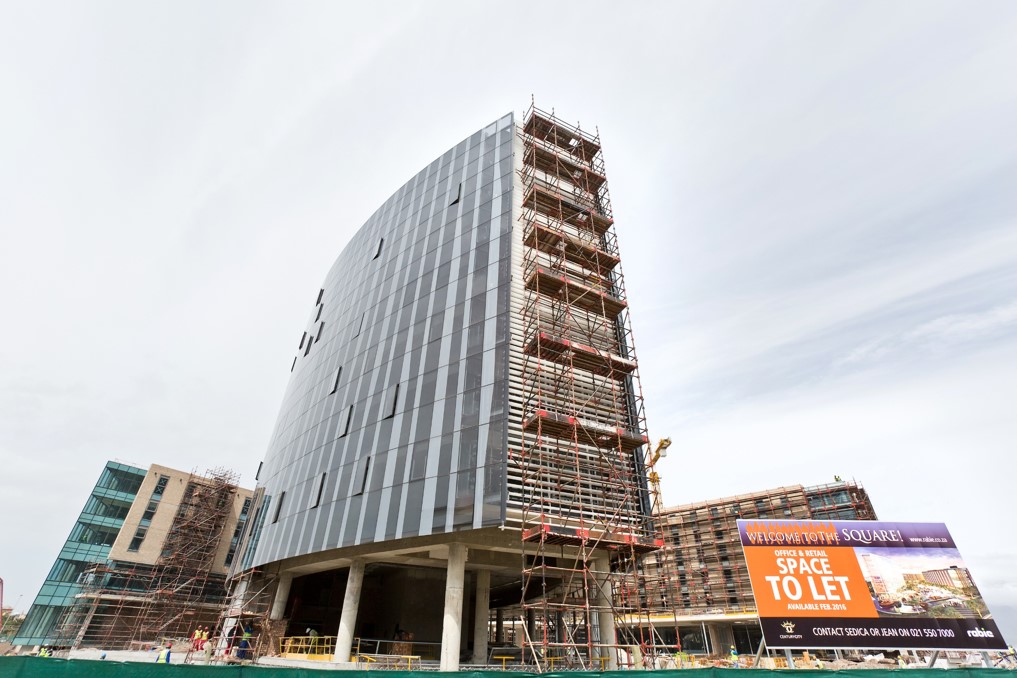 Rabie Property Group’s R1billion mixed use Century City Square development, which is set to become the new commercial hub of Century City, is on track for completion by February 2016.

The entire development, which is set over a basement parking podium, comprises a 900 seat Century City Conference Centre with a total capacity of 1200 over 20 venues, a 125 room hotel, 51 apartments, restaurants and coffee shops, 1330 parking bays as well as more than 15 000 square metres of offices ranging from hip and funky to traditional premier grade corporate in three different buildings – the Annex, the Matrix and the Apex.

The largest of these, the Apex, is an iconic eight storey building comprising 7900 square metres of offices over seven storeys with ground floor restaurants, bistros and coffee shops spilling out onto the public square. Two and a half storeys have already been let to a global corporate with strong interest been shown in some of the remaining space which is being let from R165 per square metre.

The Matrix is a mixed use building  consisting of ground floor retail/showrooms, three storeys of offices totalling 4500 square metres and 51  residential apartments set over a further three storeys. Only two of the 24 sectional title units – both 260 square metres in size – remain to be sold at around R20 000 per square metre. Sedica Knight of Rabie Property Group says much of this space was purchased by investors and they were now letting the space on their behalf.

The third office component, the Annex, comprises 3000 square metres of offices over three floors above the conference centre with its separate ground floor entrance. A third of this space has already been let.

Knight said offices to let, which will enjoy the fastest internet speeds in Africa averaging 39Mbs, range from 120 square metres to 5000 square metres at rentals from R165 per square metre.

She added that an exciting variety of restaurants and coffee shops will be opening in the buildings around The Square with leases currently being finalised and announcements in this regard expected to be made shortly.

The entire Conference Centre precinct known as Bridgeways is being developed as a green precinct and is already home to four Green Star rated office buildings – Bridge Park, Chevron, The Business Centre and Philip Morris. The Century Square development itself is registered with the Green Building Council of South Africa for a pioneering Green Star mixed use rating.

Over and above all the facilities on offer in Century City Square, the development is in easy walking distance of the Virgin Active gym, convenience retailing at Colosseum, Canal Walk Shopping Centre, the MyCiTi bus station, the Century City train station and Canal Walk.

Knight said the Century City Square and the rest of the Bridgeways precinct will benefit from new infrastructure projects totalling more than R130million being undertaken including the construction of R45million of  roads and canals in the Bridgeways precinct,  an R18million upgrade of Sable Road, a further R4million upgrade of Bosmansdam Drive and the completion of a R35m MyCiTi trunk station – all measures aimed at significantly easing peak traffic congestion. The precinct will enjoy a new exit directly onto Sable Road which will open at the end of 2015.