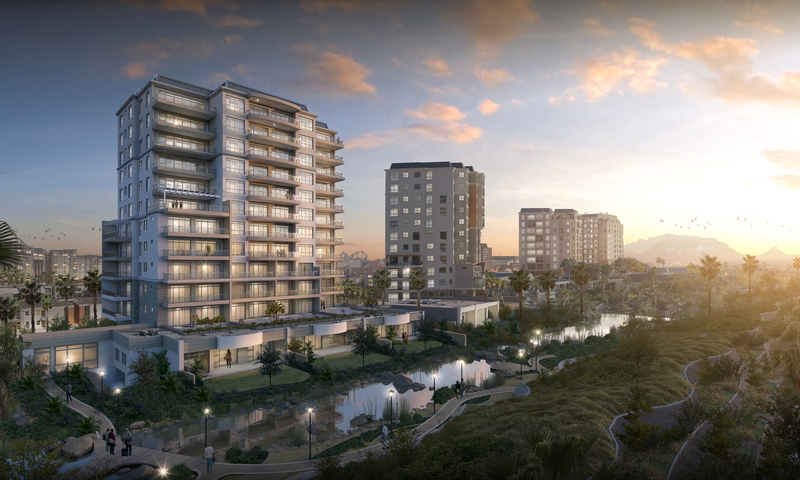 Palme d’Or construction on schedule for completion in June 2016

A year ahead of anticipated completion, 32 of the 50 apartments in Palme d’Or – the fourth apartment block in the Oasis Luxury Retirement Resort – have been sold for a total consideration of just under R144 million.

“This is very unusual for a retirement product,” says Colin Green a director of the Oasis Joint Venture which comprises Rabie Property Group and a Harries Projects consortium.

“In fact a few years back only seven units were sold in a 12 month period and the block was only sold out long after construction was completed, once buyers could see what they were getting.

“Since then the tempo of sales has picked up considerably – we have sold over 230 apartments in the first three phases. Even then to have sold more than 60% of units in block four one year ahead of completion is a rarity in this market,” he said.

Named after the highest prize awarded at the Cannes Film Festival, Palme d’Or will be unashamedly upmarket.

The 11-storey Palme d’Or will be served by two lifts and a 24 hour dedicated concierge. Construction is currently at fourth floor level.

Priced from R2 650 000 to R6 315 000, VAT inclusive and with no transfer duty payable, all apartments will have at least one basement parking and most of them will also have a store-room included in the price.

He said there were many factors driving sales at Palme d’Or not least of which was that buyers could see the high calibre of the Oasis Retirement Resort development they were buying into and that all the amenities such as clubhouse and care centre were already there and not based on future forecasts or promises.

The first two phases of the Oasis development consisted of Palm Springs and Palm Grove apartment blocks with 174 units in total and a Club House, of which all residents automatically enjoy membership. These facilities include a 25m indoor heated pool where regular water aerobics classes are given by a qualified teacher, a massage room, sauna, steam room, fully equipped gym, a library, lounge areas, a restaurant, bar, bridge room, billiard room and a new, large multi-purpose recreational/entertainment venue with a patio overlooking ponds and beautiful landscaped gardens which were extended with the opening of Palm Royale and will be further extended with Palme d’Or.

Also completed in phase one is the Oasis Care Centre which offers hotel-style assisted living apartments, frail care and a specialised Alzheimer’s/Dementia unit as well as physical rehabilitation.

As with Palm Royale, Palme d’Or will be linked undercover to the Oasis Club.