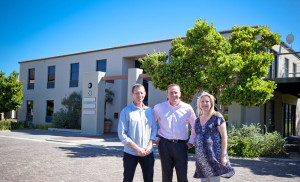 The stand alone office block offers 555 square metres over two levels and is one of 19 office blocks in the 10 000 square metre first phase of Greenford which was completed in 1999. The sectional title office park, which is surrounded on three sides by a nature reserve and the racecourse, enjoys spectacular mountain views.

Leigh Metcalf, a director of managing agents, Rabie Property Administrators, said demand for Greenford offices remained extremely high and vacancies had been negligible since it was first developed.

“Block C in fact has had the same tenant until now and there are only a few small office suites available in the rest of phase.”

The deal, which is effective from January, was negotiated by independent broker, Philip Jackson.

Craig Arenhold, CEO of Fundamental Software, said they were relocating their offices from Granger Bay to Kenilworth.

“Allan Gray is a shareholder of ours, and they offered us some of their ‘spare’ space here in Granger Bay some years ago. We have enjoyed being here but now with Allan Gray moving to their new premises a need arose for us to find alternative premises. Importantly the move to Greenford will be the first time that Fundamental has its own building, and we are very excited for the move”

He said Greenford was located close to where the majority of their staff live and was central to the M5 for those who lived in town or the northern suburbs.

“Importantly for us it is also a very green address – being on the racecourse is a great plus, as are the open spaces downstairs and the natural flow to green surroundings. Leaving the concrete jungle of Granger Bay behind will be a pleasing change.”

Metcalf said recent lettings in the neighbouring Aintree development was a further indication of strong demand for offices in the area which boded well for the second phase of Greenford, construction of which has now started.

“The first three of the 10 buildings in the 5300 square metre second phase are now under construction and will be ready for occupation by late 2013.”

Designed by Stauch Vorster Architects in a modern Cape vernacular, the buildings range in size from 230m2 to 822m2 with configurations of offices for sale ranging from 140m2 through to 1300m2 .  Fronting onto the nature reserve, the buildings will be set in beautifully landscaped gardens with a large water feature providing a tranquil working environment.

Selling prices, which include A grade finishes and parking, vary between R14 500 and R15 500 a square metre excluding VAT. Total development cost is in excess of R80million.  On-site parking will be provided at a ratio of four per 100m2 with a number of the buildings  offering basement parking.

The site is the last remaining to be developed in the area and is ideally located close to M5 and the recently refurbished Kenilworth Shopping Centre..