Century City offices : “Green Buildings” will soon be the norm 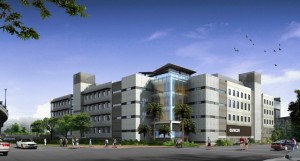 The new buzzword in the commercial property market is “Green Buildings” – that is new buildings or redeveloped older buildings which have little or no negative impact on the environment.  The question is: Is this a fad or is it real and commercially viable?

Colin Anderson, a director of Rabie Property Group, says if one considers what is happening internationally, then one has to assume that it is only a matter of time before “Green Buildings” become the norm in South Africa.  “We, at Rabie, certainly believe this and have put our money where our mouths are and we are currently  developing a new regional office for Aurecon at Century City, which has been submitted to the Green Building Council of South Africa (GBCSA) for accreditation.”

Anderson said Century City was well suited to developing “Green Buildings” as it is a precinct which ticks many of the boxes required to obtain credits towards a Green Star rating.   “These include its access to public transport and amenities.  Century City now has a railway station within easy walking distance and the new IRT system will shortly service Century City terminating at the Century City Station, further improving connectivity from the station.  In addition, an extensive bus and taxi network as well as an internal shuttle service are also available.  In terms of amenities, Century City is  home to one of the largest shopping centres in the country, Canal Walk Shopping Centre, a state-of-the-art Virgin Active Gym, restaurants, coffee shops and convenience retail and has in excess of 3000 homes within the precinct making it a truly live, work, play environment.”

Anderson says that another tick in the Green Star box was Century City’s storm water management system.   “The canal system at Century City is not merely an aesthetic asset to the precinct.  It is a vital part of the storm water management system which takes the majority of the storm water runoff with only the excess overflow being discharged into the municipal system.  All the canal water is then polished through a series of ponds and natural filtration systems which ensure the quality of the water.”  He said a third tick in the box was Century City’s reduced use of potable water.  “Every property within the precinct is connected to a grey water system which uses treated effluent therefore eliminating the need to use valuable potable water for irrigation.  This is not only environmentally friendly, it also makes economic sense as it is charged at a fraction of the cost.”

Anderson said while “Green Buildings” were slightly more expensive to develop, they were more efficient to run.   “The problem for developers has been that they have to invest more capital and the savings in operating expenses (such as water, sewerage, electricity and so forth) are for the tenant’s benefit.  Now with electricity costs in South Africa rising rapidly – another 25 % increase last month – astute tenants are demanding efficient buildings.”

He said another major benefit of “Green Buildings” was that they provided an improved internal environment with better natural lighting and ventilation creating better working conditions.   “It has been proven internationally that productivity levels and absenteeism is significantly improved in Green Buildings versus older sick buildings,” he said.