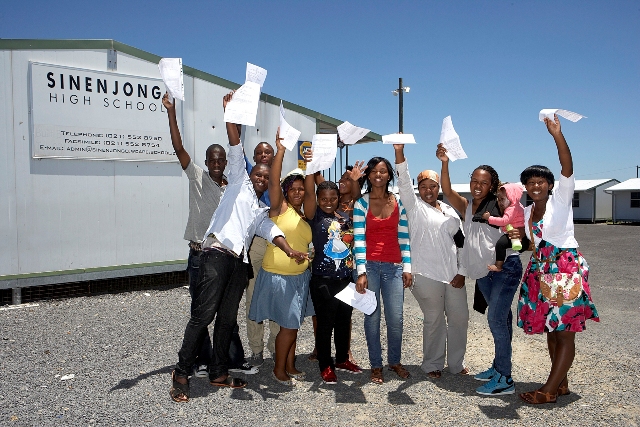 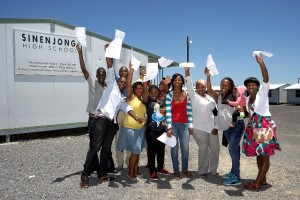 Celebration for Sinenjongo’s Matrics of 2011

The School in Joe Slovo Park, which Rabie adopted as the major beneficiary of its Corporate Social Investment programme five years ago, achieved an 88,5% pass rate with 77 learners against 43 the previous year passing the 2011 matric exams.

The achievement was recognised by the MEC for Education Donald Grant and the Premier Helen Zille who presented the principal, Ms Nopote, with a special award for being among the top 10 most improved schools in the province.

This is a long way from the 27% pass rate the school recorded four years ago with the results showing a year on year improvement thanks to extremely hard work by staff and learners and a number of important support interventions and programmes funded by Rabie and some small sponsors in recent years. These include the St Marys Interactive Learning Experience (SMILE) and five additional maths, science and English teachers.

Of the 10 learners who failed last year, 9 qualify for supplementary examinations.

What is extremely pleasing is the improved quality of the results with learners achieving 19 Bachelors (university passes) and 37 Diplomas (technikon passes) giving a total of 56 tertiary education passes against less than 20 the previous year.

The school achieved 14 subject As, 66 Subject Bs, 111 Subject Cs and 114 Subject Ds – a huge improvement on last year where the majority of marks were below 50%.

100% passes were recorded in Computer Applications Technology, English First Additional Language (the contribution of SMILE very evident), IsiXhosa Home Language, Life Orientation, and Tourism.  The pass rate for accountancy was 69,2% which represented a huge improvement on mid-year and due in the main to the work of a new Head of Department. We expect further major improvement in Accountancy marks this year.  The pass rate in other subjects was  Agricultural Scienc(90%); Business Studies( 89,7%); Economics (76,9%); Geography( 76,2%); Life Sciences (95,8%); Mathematical Literacy  (92,4%); Mathematics (85,7%); Physical Science (84).  The average mark achieved for Maths was 46,7%  – more than double that of two years ago!!The average science mark was 43,8% – Also-double that of two years ago!! 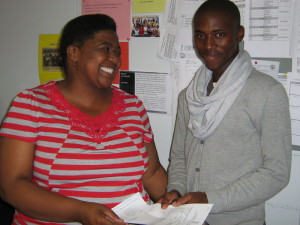 The principal, Mrs Nopote, and top A student, Lukhanyo Velelo

Our top student Lukhanyo Velelo achieved unbelievable results and the first As we have ever had outside of Life Orientation which is not an academic subject. He achieved 89% for mathematics, 85% for Physical Science, 87% for Life Sciences, 85% for Computer and Technology, 92%   for Life Orientation and 79% for both Xhosa and English. He will be applying for a remark in the two languages and is aiming to study a BSC in Actuarial Science at Wits University.

This is an exceptional achievement for a young man who has lived in a single room in Joe Slovo with his uncle and cousin for the past four years!  Well done Lukhanyo!

We are trying to assist Lukhanyo raise sponsorship for his degree and will keep you informed of progress in this regard.