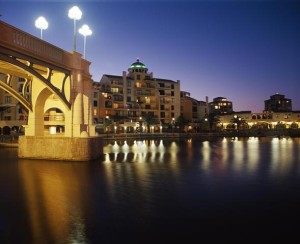 Demand for residential units to let at Century City has continued to soar with buy-to-let investors returning to the market on the back of shortage of rental stock.

Two of the main letting agents, Property World and Property Café, ascribe the popularity of the precinct to the growing commercial component at Century City with over 300 000 square metres of office space already built or committed to and new deals being done on a regularly basis.

“That, coupled with the high quality of security and infrastructure,  not to mention the availability of world class amenities right on one’s doorstep, all adds to the high demand equation,” says Brian Usher, general manager of Property World which has close to 150 rental properties on their books and a waiting list of tenants.  “Units on our books are being snapped up as soon as they come to the market and it is tough finding sufficient stock to keep pace with demand.”

Jackee Robertson, rental agent at Property Café which administers over 200 properties at Century City for investors, concurs saying they too have a waiting list of would-be tenants and seldom experience any vacancies.  “There is no doubt Century City has become hugely popular particularly since so many companies have relocated their offices here. The greatest demand is coming from young professionals, about 60% of which are working in Century City, but also from those working elsewhere but who are attracted to Century City for the wonderful lifestyle, safety and security that it offers.”

Usher says the shortage of available rental stock generally at Century City has seen buy-to-let investors re-enter the market in significant numbers this year after a two to three year absence from the market.

“This has been particularly evident in our latest development Little Moorings where 32 of the 42 units have now been sold with more than 60% of these to buy-to-let investors.

“We expect Little Moorings to be sold out long before buyers take transfer in January 2012 especially seeing it is the first residential development at Century City which will be included in the new open access Fire-to-the-Premises network which is being rolled out by Century City Connect and which is set to offer those living and working in Century City access to the country’s fastest broadband data, voice and multi-media services.”

Usher said the return of the buy-to-let investor into the market and the strong take-up of apartments at Little Moorings as well as other developments in Century City would soon result in a shortage of new residential stock.

“So if you are considering buying property, now is the time to get in otherwise you will have to wait a year or so before the developer’s next planned residential project Quayside comes on stream.”