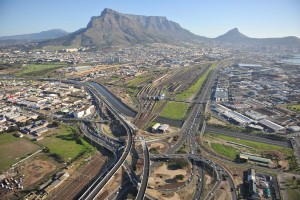 The nearing completion of the Koeberg Interchange represents the last leg in unlocking Century City’s accessibility to the entire Peninsula and has been greeted by increased inquiries from corporates looking to relocate to the precinct, says John Chapman, a director of Rabie Property Group.

He said the opening of Ramp B, which connects the M5 with the N1 going towards Century City, a few weeks back had literally shaved off an average 20 minutes travelling time for motorists coming from the Southern Suburbs to Century City.

“Previously one would hit a traffic jam even over weekends and off peak periods but now there is free flowing traffic no matter what time of day one uses the road. It has really been a life changing experience and makes driving from the Southern Suburbs to Century City or the northern or western suburbs of the Cape Town an absolute pleasure.  According to Transport and Public Works MEC Robin Carlisle an estimated 200 000 vehicles use the M5 daily between the N1 and N2 compared to around 100 000 on the N1 so if each of these vehicles is saving on average 20 minutes each way on travel time the impact on the carbon footprint is hugely positive.”

Chapman said the opening of Ramp A ahead of the 2010 Soccer World Cup had also initially had a positive impact initially but the start of widening works on the M5 post World Cup had once again created frustrating tailbacks.  “However, this is only a temporary inconvenience and the full impact of the Koeberg Interchange/M5 upgrade will be felt when the M5 widening between the N2 and N1 is competed in April next year.”

Chapman said that many decision makers of companies resided in the Southern Suburbs and while their staff had been keen to relocate to Century City traffic congestion around Koeberg Interchange had until recently  been a major deterrent.  While the Koeberg upgrade is benefitting motorists, upgrades to the public transport system including the opening of the new Century City Station ahead of the Soccer World Cup had also made travelling to and from Century City much easier for other commuters with in excess of 4500 pedestrians a day making use of the Pedestrian walkway between the Station and Century City.

Chapman said the Century City’s extensive public transport system would be further improved with the inclusion of Century City into the City of Cape Town’s Integrated Rapid Transit System in the second half of 2012.  “These transport facilities, coupled with the extensive cycle tracks within Century City, also boost Century City’s baseline rating for Green Buildings in South Africa,” he said.