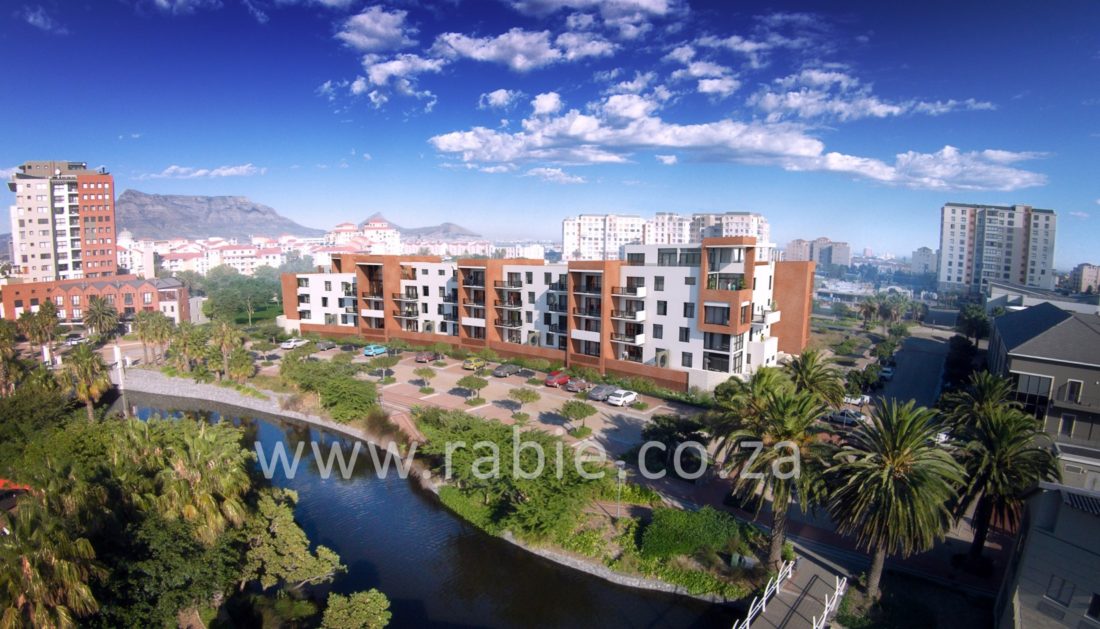 Miguel Rodrigues, Development Manager for Rabie Property Group, said the apartments are on average much larger than what has been developed at Century City to date and will vary in size from one bedroom units of 70 square metres to a four bedroom penthouse of 229 square metres.

“These sizes exclude balconies which range between 10m2 and 65m2.

“As such these apartments are perfect to live in and we expect a large percentage of purchasers to be owner occupiers as not only are the units more spacious than usual but they are also very centrally located within easy access to Canal Walk shopping Centre, schools and creches.”

Manhattan Quarter is being built on a site adjoining Manhattan Towers –  a 15-storey block of 82 apartments set over a ground floor commercial component including a restaurant and conference facilities – and Manhattan Wharfside – a strip of single and double storey apartments fronting onto the Grand Canal. The existing Manhattan components were built in red facebrick and this architectural element will be carried through to Manhattan Quarter.

Apartments are priced from R1,6million to R4,8million and all apartments will have secured, covered parking for two cars which is a first for Century City.

“Two, three and four bedroom apartments will each get two bays and all the one bed units will get a tandem bay.”

Rodrigues said apartments would either overlook the Grand Canal  or the largest public  park in Century City, both of which would provide a scenic outlook and a sense of peace and tranquility.

The apartments will be housed in two adjoining blocks with a staggered skyline of three, four and five storey sections. Being developed at a total cost of R150million, Manhattan Quarter will be serviced by two lifts off a central lobby with a desk for a conceirge.

The rest of the Manhattan precinct is also being developed and will include a commercial component, a restaurant, a large park and a crèche.

Construction of Manhattan Quarter, which was designed by Munnik Visser Architects, iss to be undertaken by Big Ben Construction and is due to start in July with transfers scheduled for October 2016.

Brian Usher of Property World, the on-site sales agents for Rabie’s new residential developments at Century City, said they expected sales to be brisk in line with the two previous developments – Mayfair and the Matrix – which both sold out literally within the first 45 minutes at their respective launches.

He said they had a list of would-be purchasers who had attended the Matrix launch but who had not managed to secure a unit and they were being given the first opportunity to buy at Manhattan Quarter before the development was released to the broader market.

“They left the Matrix launch disappointed so to be fair we are giving them first bite.”