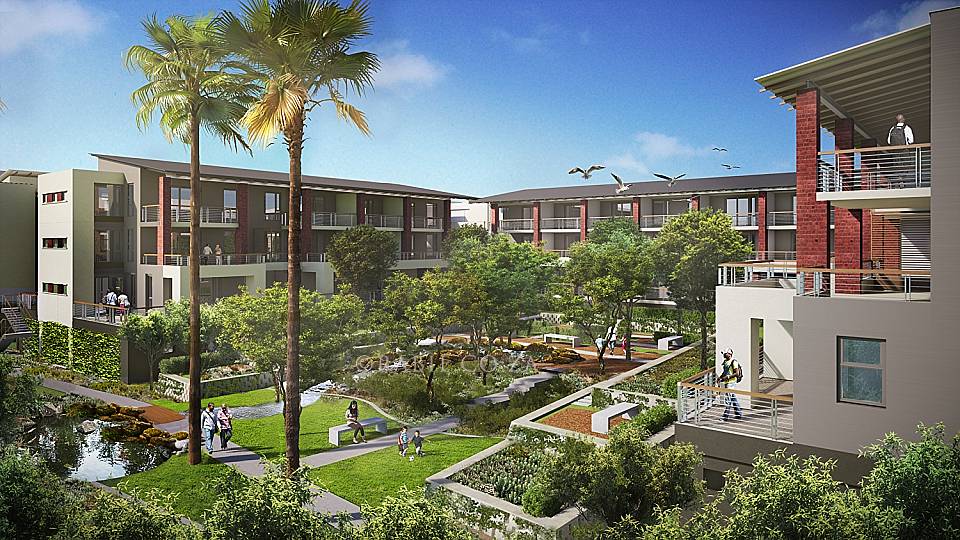 Mayfair Gardens, a new upmarket development of 70 sectional title apartments, is to be launched shortly in Century City to meet huge pent up demand for homes in the burgeoning precinct.

In close walking distance of Canal Walk Shopping Centre and the new MyCiTi Trunk Station, the R106m Mayfair Gardens will comprise one and two bedroom apartments in three storey walk-ups which will also be serviced by two lifts.

The apartments, all of which will boast balconies overlooking beautifully landscaped gardens with water features and streams and a meandering walkway, will range in size from 50 square metres to 92 square metres excluding balconies which start at around 10 square metres. Prices start at R1 050 000 to R2 090 000, VAT inclusive. A handful of ground floor units also boast their own private garden.

Mayfair Gardens will form part of a larger mixed-use development which will include sectional title offices.

John Chapman, a director of Rabie Property Group, says the launch of Mayfair Gardens, which has been designed by Tim Hughes Architects and Archilab, follows the rapid sell out of three other residential developments – Ashton Park, Quayside and Quaynorth – all of which were sold out long before construction had been completed.

Ashton Park, a R250m development currently still under construction and comprising a total of 140 apartments, was sold out more than a year ahead of completion and similarly the Quayside and Quaynorth developments which comprise 63 and 28 apartments respectively.

“The rate of sales took us completely by surprise and for the first time in a decade we literally ran out of new development stock. In recent months we have been working around the clock to be able to bring Mayfair Gardens to the market to meet the continued demand for homes at Century City and have a waiting list of around 100 people, most of which have indicated they are serious buyers,  so we expect sales to be very brisk,” he said.

Property World, the official on-site agents for Rabie’s new residential developments at Century City has sold more than 1900 homes in the precinct for a total consideration of more than R2,5 billion over the past decade and secured a further R500million in resales since July 2006.

Manager Brian Usher says there has been no let-up in demand for homes in the area and before they ran out of stock in July they had enjoyed their best seven months in terms of sales for five years.

“Sales are being spurred by the quality of life offered in the precinct, from its safety and security to the high level of infrastructure and services to all the world-class amenities literally in walking distance – from Canal Walk Shopping Centre to schools, gyms, restaurants, churches and even sports clubs. There is also a huge demand for rental properties in Century City with long waiting lists of tenants which is an added attraction for investors.

“These factors, coupled with the fact that there are a finite number of residential opportunities available are continuing to drive sales with people realising that if they do not want to miss the boat, they had better get in now.”

Construction of Mayfair Gardens is scheduled to start in early 2015 with transfer and occupation planned for mid-2016.