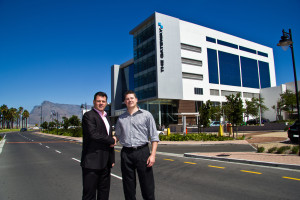 Moore Stephens BKV Inc. has been operating since 2003 and is part of the Moore Stephens International Association (MSI), one of the world’s major accounting and consulting networks with 351 independent member firms and 630 offices in 98 countries. Moore Stephens is represented nationally with offices in all major urban centres in South Africa.

Moore Stephens Director Andrew Pitt said the decision to move to Century City was a strategic one and formed part of the company’s vision to effectively service the northern, central and southern suburbs markets from one central location.

With the relocation of Moore Stephens, The Gateway is now fully let. The other large office tenant is Symantic while the SMG BMW dealership and MK Exotics occupied the ground floor motor showrooms.

The Gateway mixed use development is situated on a high visibility site bounded by Ratanga Road and Century Boulevard at the busiest entrance to Century City and within a prestigious precinct which includes the convenience retailing and variety of eateries at the Colosseum; a new Virgin Active gym, a four star Protea hotel, the R750m Crystal Towers mixed use development which includes a 180 room five star hotel, and the Public Transport Interchange. It is also in easy walking distance of Canal Walk shopping centre.

Developed by the Rabie Property Group at a cost of R150million, the building has successfully risen to the challenge of integrating three different components and yet providing them each with their own individual identities as well as dedicated entrances and parking facilities.

The four floors of offices with a total GLA of 3771 square metres offer spectacular mountain and sea views from the top floors overlooking a roof top garden and are set over a level of parking and double volume motor showrooms.