R33m MyCiti Trunk Station to be built at Century City 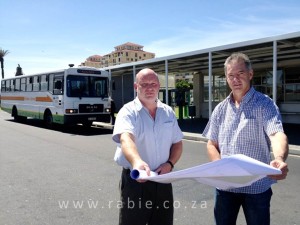 Construction of a MyCiti Trunk Station at Century City, which will be a major interchange between the trunk and feeder routes of the city’s Rapid Bus Transit system, is to start later this year with completion set for the second quarter of 2014.  It is to be developed at a cost of R33million by the developers of Century City, Rabie Property Group as its next major infrastructure project for the precinct.

Rabie director Colin Green said the release of bulk at Century City was linked to various infrastructure projects, of which the Trunk Station was one.   “To date a total of just under 900 000m2 of bulk has been released and close on 750 000 m2 has been completed. The balance comprises projects in various stages of the planning and subdivision process.   The construction of the MyCiti Trunk Station will see the release of the next tranche of bulk for Century City.”

Green said they understood the Station will in the long term be a major interchange between the trunk and feeder routes emanating from Atlantis, Durbanville, Khayalitsha and the Southern Suburbs.

He said in the short to medium term, the MyCiti service will be complemented by Golden Arrow and mini bus taxis services, until such time as the MyCiti rollout has been completed across and throughout Cape Town.

“Fourteen feeder bus stops in Century City were completed in the latter part of 2012 and construction is now well advanced on several routes that connect Dunoon to Montague Gardens and Century City. This will bring greater integration of the business parks and industries in Montague Gardens and the residents of Joe Slovo and Marconi Beam into the formal public transport network.”

Green said buses are scheduled to start running on several routes during the course of this year.   “The first route to come on stream will be a connection from the Civic Centre – Table View route at Milnerton along a new main route stopping at Racecourse, Royal Ascot and Omarumba stations. From Omarumba, a feeder service will run in mixed traffic through Montague Gardens to Century City, down Century Avenue, past the Canal Walk shopping centre and along Sable Road to the Century City railway station.”